We are happy to announce another release of the Ladybug Tools (LBT) for Grasshopper (version 1.3.0)!

For people who already have an older LBT plugin installed, the Food4Rhino download for version 1.3.0 includes an uninstaller.gh file that can be used to completely uninstall your old version. Given all of the changes that we have made to the plugin over the last few months, we recommend using this uninstaller and then reinstalling the plugin in order to ensure everything on your system is up to date. Note that the uninstaller.gh will remove any custom standards you may have manually added to the ladybug_tools/honeybee_standards folder and so you should make a copy of them before running the uninstaller. If you forget, the uninstaller automatically copies them to C:\Users\[USERNAME]\.honeybee_standards before it runs. And don’t forget to update to the compatible version of OpenStuido and Radiance listed in the compatibility matrix.

Since the last release, we have standardized several aspects of the Honeybee JSON file schema and core libraries in preparation for the release of the Polliation Rhino Plugin and Pollination Revit Plugin. People who have been saving their Honeybee models into the HBJSON format to easily share models between machines (and take advantage of the future ecosystem around HBJSON) can use the new HB Update HBJSON component to upgrade their old HBJSON files to the latest version.

The biggest update that we have since the previous release is that effectively all Legacy Radiance capabilities are now supported in LBT version 1.3. This includes all Legacy Radiance recipes and all result processing capabilities. There are a few Legacy features left to add, particularly in Ladybug, but we will be working on these over the next few months as we add more advanced energy and radiance features.

Many people on this forum are aware that we have documentation for the Ladybug Tools Python SDK but also know that this SDK documentation is at a level of detail far beyond what most people need when working in Grasshopper. So we are happy to say that we now have searchable documentation devoted solely to the Grasshopper components of the LBT plugin. 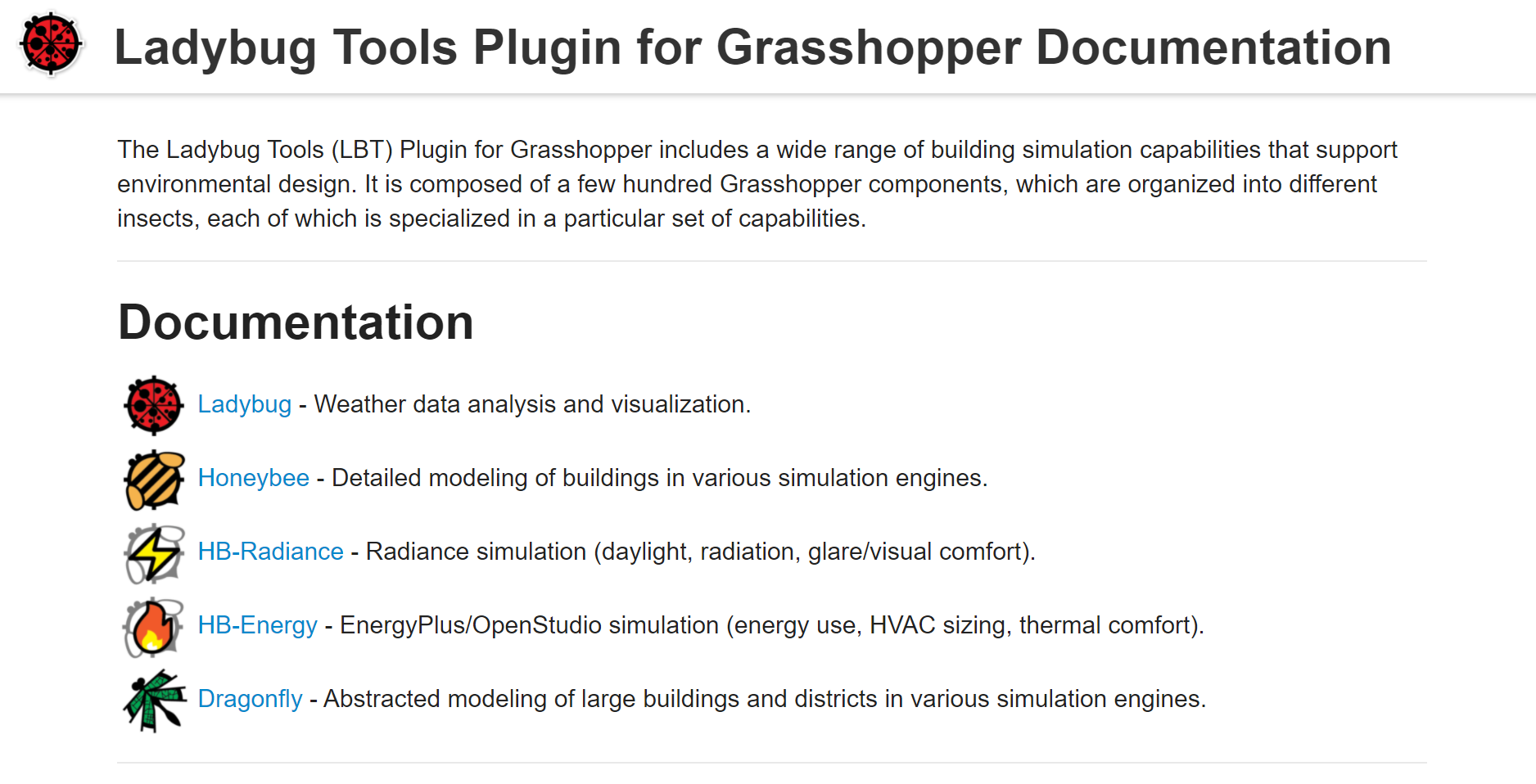 It became clear to us after the last release that, while our new methods for executing recipes are powerful in the way they manage parallel tasks, they lacked several key reporting features to make it clear how the recipe execution happens. Accordingly, the latest recipes in the new LBT plugin will give a clear report of steps that have failed whenever anything goes wrong. We also added a new component called HB Visualize Recipe Execution, which can be used to visualize the execution of a recipe within a web browser. 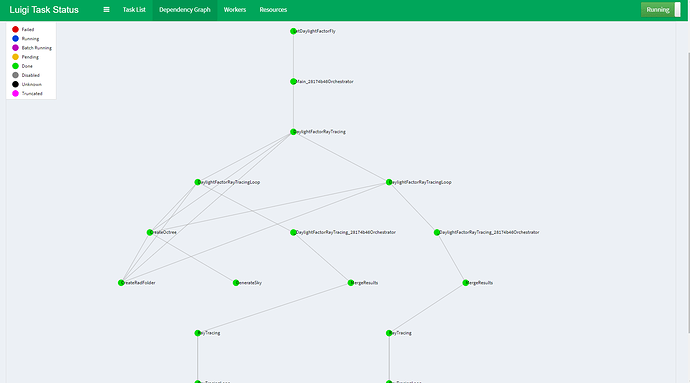 Our historic approach to parallel processing has been varied but this LBT 1.3 release standardizes how such parallelization is implemented across the plugin. Now, all parallel_ boolean inputs have been replaced with a _cpu_count_ that allows you to select the specific number of processors used by the component. In all cases, if you leave this _cpu_count_ unassigned, it will automatically default to using one less processor than the total number of processors available on your machine. This is true whether you are simulating a recipe, performing a Ladybug Direct Sun/Radiation calculation, or intersecting solids to build a Honeybee model.

Exporting and importing Green Building XML (gbXML) files is critical for interoperability throughout the Building Energy Modeling (BEM) ecosystem. So we are happy to announce two new components: the HB Dump gbXML component and the HB Load gbXML component. The components do exactly what they sound like and the Load gbXML component can also be used to import OSM and IDF files into honeybee. Since the Ladybug Tools plugin sits within the robust geometry engine of Rhino, it can be used to produce clean geometry for other BEM interfaces that have simpler geometry engines. We have already tested the export of such honeybee-generated gbXMLs into IES and verified that the translation happens smoothly.

Programs, ConstructionSets, and HVAC for ASHRAE 2016 and 2019

In accordance with the upgrade to OpenStudio 3.2 that happened in this release, we were able to expose the new ProgramTypes, ConstructionSets, and HVAC templates for the latest versions of the ASHRAE standard that forms the basis of most international building energy codes. Specifically, we now have templates for ASHRAE 90.1, 2016 (IECC 2018) and ASHRAE 90.1, 2019 (IECC 2021). Assigning the new standards is the same as previous workflows (there is a new HB Building Vintages component with the new options). When building vintages are not selected for a particular program, construction set or HVAC, the plugin automatically defaults to the latest standard (ASHRAE 90.1, 2019).

While the state-of-the-art way to build energy models is to represent separate parts of a building with distinct Rooms and room ProgramTypes, many of us are unable to do this in early stages when working with building massing. In these cases, it’s preferable to use a single ProgramType object to represent an entire building mix and, historically, this requires a list of program ratios in order to use the HB Blend Programs component to create this building mix program. However, sometimes, even this list of program ratios is not available and it is for this reason that we’ve added support to plug the Building Program directly into the components that create Honeybee Rooms (or Dragonfly Buildings).

EnergyPlus’s simple daylight controls were a popular feature of Honeybee Legacy and so we are happy to say that they are now implemented in LBT honeybee via the HB Apply Daylight Control component. We’ve exposed a few more inputs that should make it easier to model a wider range of daylight dimming technologies.

Another highly-requested legacy feature was the ability to add additional thermal mass to Rooms, which can have significant impacts on peak loads and thermal comfort. So we have added support for this via the HB Internal Mass component

Historically, the only way to model dynamic building elements like electrochromic glass was by using the HB Window Construction Shade component or equivalent legacy workflows. However, these only allow a maximum of two states (on and off) meaning that many technologies cannot be well-represented this way. Accordingly, LBT 1.3 includes a Window Construction Dynamic component that can represent dynamic constructions with any number of dynamic states.

Throughout the plugin, we exposed various new inputs and outputs on components. To list a few of particular note:

Point-in-time (PIT) simulations are usually the first recipes that new Radiance users run as they are important for understanding the fundamentals of daylight modeling. Accordingly, we are happy to say that LBT 1.3 has full support for both grid-based and view(image)-based PIT recipes in version 1.3. They are supported via the Point-In-Time Grid-Based and Point-In-Time View-Based components. 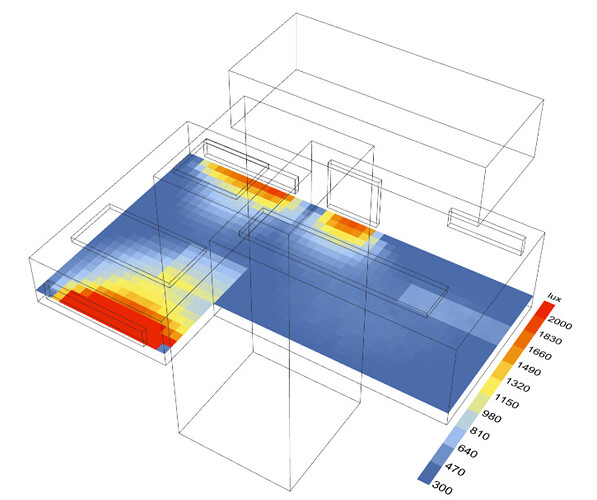 While the Point-in-Time View recipe can be used to produce high-quality Radiance renderings (with parallelization, overture calculations, and other bells and whistles), it can have a high overhead for simple use cases like quickly checking the properties of a Radiance scene. For this reason, we have added the HB Check Scene component, which uses streamlined methods to render quick, low-quality images for such purposes.

With the new ways to produce images, it was critical to include several components to process and interpret the images. To this end, we have added 3 components that essentially replicate legacy capabilities: 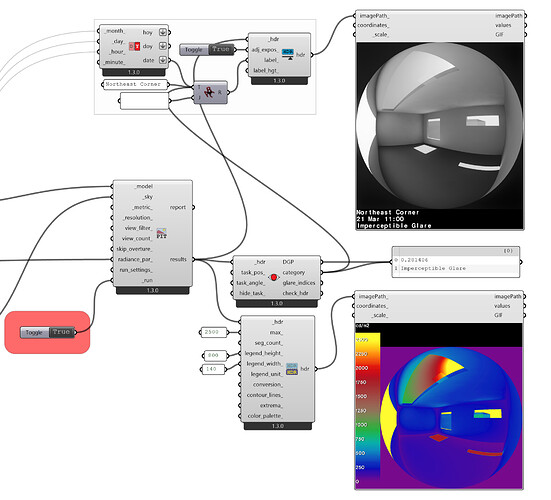 While these recipes aren’t the most novel as they essentially replicate Legacy capabilities, they are nevertheless important. The HB Cumulative Radiation recipe uses the same sky-patch-based methods that are used in the LB Incident Radiation component but can account for ambient bounces. The HB Sky View component effectively makes the capabilities of the legacy “Vertical Sky Component” (VSC) recipe more generalizable. When used with vertically-oriented sensor grids with the cloudy_ option, the recipe will compute VSC. But, if all defaults are left as they are, the component will simply compute the fraction of the sky dome seen by each sensor.

In addition to the cumulative radiation recipe, the 1.3 release also includes an Annual Irradiance component, which can be used for cases where solar irradiance at each time step of a time period is needed. The fundamental calculation of this recipe is the same as that of Annual Daylight in that a detailed accounting of direct sun is computed at each timestep. However, the recipe computes broadband solar irradiance in W/m2 instead of visible illuminance in lux.

After several users requested the ability to parse and analyze the hourly results from Annual Daylight (and now also Annual Irradiance) simulations, we have added 4 components that assist with such workflows. All components take the .ill files produced by these simulations and output various statistics on them. The new components include the following: 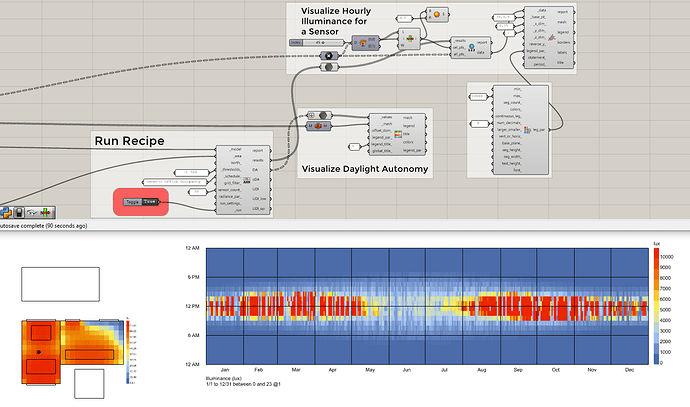 Many users know that Bidirectional Scattering Distribution Functions (BSDFs) are becoming an increasingly popular way to model complex materials like blinds, and light diffusing materials in Radiance. As a result, we are happy to say that BSDF modifiers now work for all Radiance recipes that currently exist in the plugin.

Improve Thermal Mapping Accuracy - We had the goal of improving the HB-Energy thermal mapping recipes in this release but we were not able to implement it in time. The current simplified longwave calculation in the LBT thermal maps is still the only thing preventing us from saying that the LBT thermal maps are a clear improvement over their Legacy counterpart. So we aim to have this implemented in the next release.

Additional Energy Features - We are currently missing a few important energy simulation features like radiant HVAC, detailed service hot water systems, photovoltaics and more issues that can be seen on the honeybee-energy Github. We hope to work our way further down this list before the next release.

Superb .Ladybug keeps getting awesome with each upgrade !

Amazing, you always leave us speechless.

This is great!
Thanks @chris and ALL LBT team.
This is a train that can’t be stopped.
-A.

One important question for us: how is the upgrade done using the single-click installer? Is the installer that we have only for V1.2?

Great additions to the daylight toolbox!

Yes, @MaxMarschall . If you purchased single-click installers, you’re entitled to updated installers for the year from when you bought it. Just email info@ladybug.tools and we will send it to you.

Awesome work! Thanks to the LBT team for continuing strongly, these additions are super useful !

Thank you @chris and LBT Team!
If I have Rhino 6 installed, can I update all of the following? Or do I need Rhino 7?

Fantastic updates, ladybug team! Thank you for these and congratulations to everyone for a job well done!

Wonderful! Thank you for the update! : )

the best! many thanks

LBT 1.3.0 is fully compatible with Rhino 6. If you find anything that’s not working in Rhino 6 that works in 7, then it’s a bug and we’ll fix it if you open a topic here.