Natural Ventilation: When was the window opened and what was the air flow rate?

I am trying to get a better understanding of the Set EP Airflow component.

I have a single, unconditioned zone (GH attached), with these natural ventilation parameters: 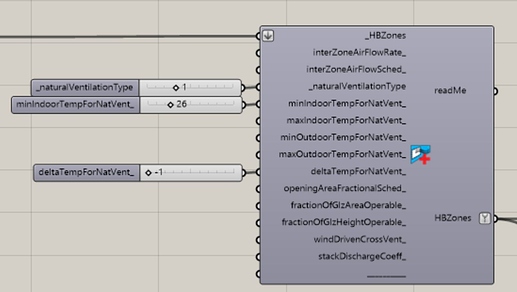 Capture1.JPG1317×745 56.6 KB
This should mean: “Open the window every time the indoor air temperature is above 26C and the outside air is at least 1C cooler”.

To test this, I wanted to display the window states, but couldn’t find a corresponding output variable. Instead, I tried displaying the air change rates from the result file, but this doesn’t look right:

Capture2.JPG1835×399 63.6 KB
I then found another output variable which seems to indicate air flow - Zone Ventilation Standard Density Volume - though it does sound like more of a mechanical ventilation metric:

Capture.JPG2923×1281 335 KB
The results seem to indicate that the window was first opened when the preceding time step had indoor/outdoor temperatures of 19.0C and 25.7C respectively.

I guess my questions are:

Any help is much appreciated!

Did you figure out how to know when the windows are open and the air flow? I have the very same question !!

I know that I am several months late but here are the answers:

This isn’t the default behavior bit you can specify a schedule that will get applied on top of any of the other setpoint controls. This schedule can be used to account for occupancy.