I am a beginner with Ladybug and I am trying to run the Direct sun hours and I get a message error: solution ‘point’ object has no attribute ‘vertices’.
I don’t know what it means. 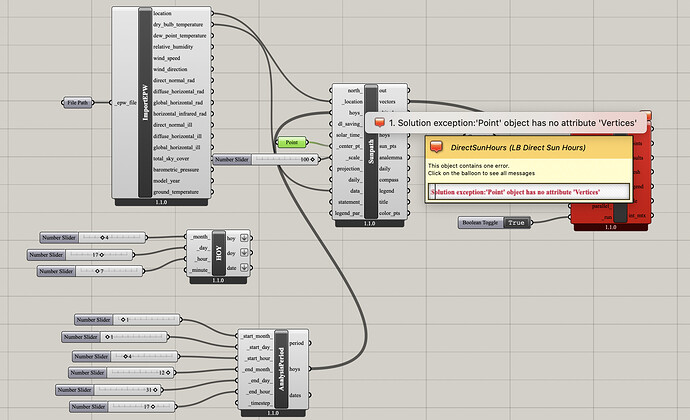 I’m not sure what you plugged into the component, it needs Meshes and/or Breps in order to work.
It looks like you have a point as an input (meshes have vertices, breps have control points, AFAIK), but your error panel blocks your input geometry.

This is an example that should work: 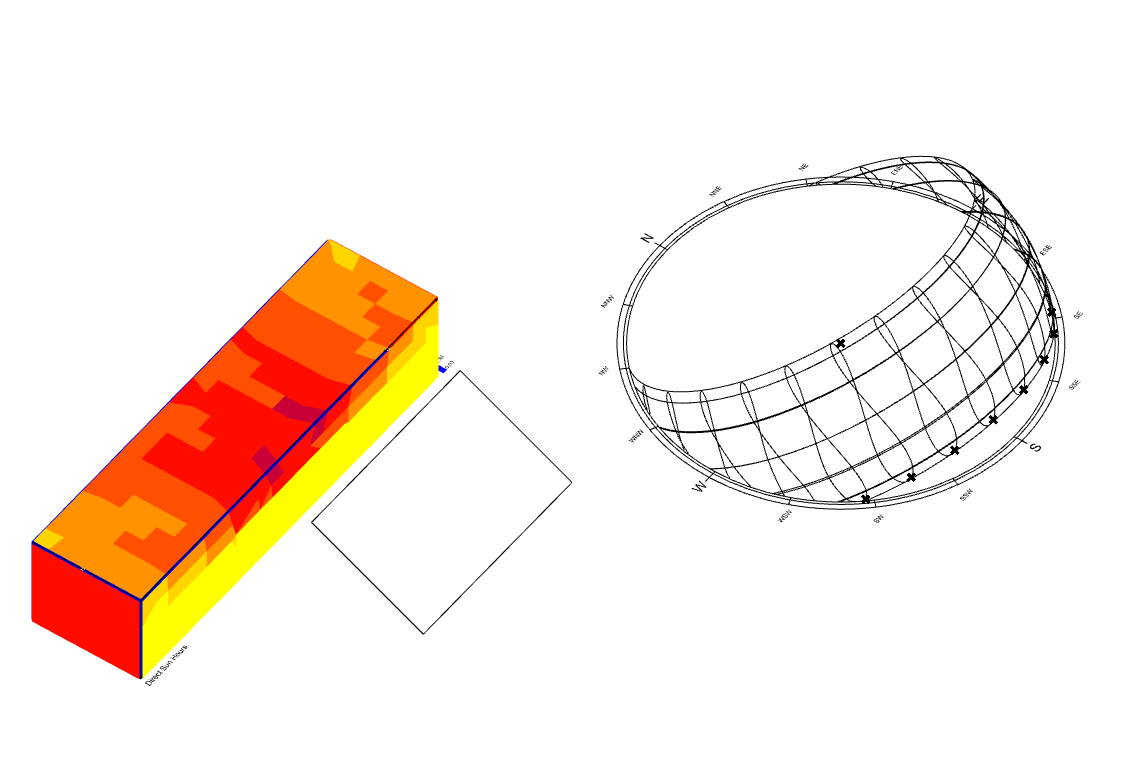 Thank you very much for your answer. It helped. I changed ‘geometry’ to mesh and now its working but it says I have 0 hours of direct sun which I know to be wrong . ( I set the ‘hoys’ to analyze a year).
Do you see what could be wrong?

Check the normal direction. You probably need to flip the surfaces.
BTW, breps should work just fine.
-A.

Check the normal direction. It detects “lit” surfaces that way.

Thanks for your answers.
I flipped the surfaces of the houses on rhino but I still doesn’t show the direct sun hours. I don’t know if that’s what you meant.
Just to give you the whole picture: 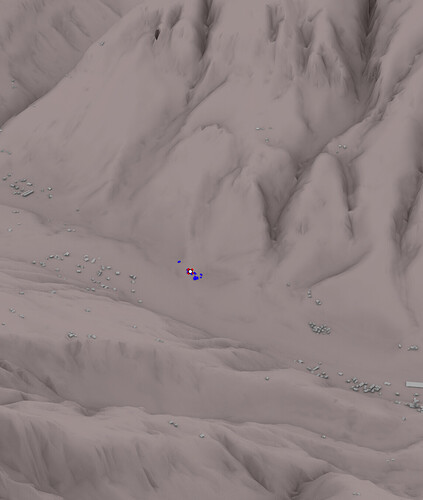 I put as a context this big mountain topography.

ps: sorry I am a beginner with grasshopper/ladybug so I might not understand all the basics.

Could you post your .gh file? WIthout seeing your geometry it’s hard to help.
(Are you sure the house is not entirely blocked by the mountain?)
I know you are a new user here, does the forum allow you to upload?

Internalize your geometry, read this post how to do it:

The purpose of this forum is to help each other and all members of this online community are volunteers who share their knowledge in the interest of making the world a better place. As such, the following are guidelines for seeking our help and, while they are not hard-and-fast rules, adhering to them is a sign of respect to our community and will boost your chances of getting help quickly. Start small, evaluate, and then build up It is recommended that you build your workflows incrementally. …

As a new user I can’t unfortunately post.
Thank you for the Forum Guidelines.
I am sure that these houses get sun practically all day during summer and a few hours during winter.

You can share the files, per example, with Google Drive.

Does it work? I internalized the geometry

Works for me. Though i used a different EPW.
-A.

Nice! Good to see it working. I tried to a different epw found on https://www.ladybug.tools/epwmap/ I use only the .epw. Still nothing…

I suspect you are working in millimetres, because I measured the width of one house, and it is 5,5km wide, if the units of the Rhino model are in meters.
LBT works well in meters, if I’m not mistaken. 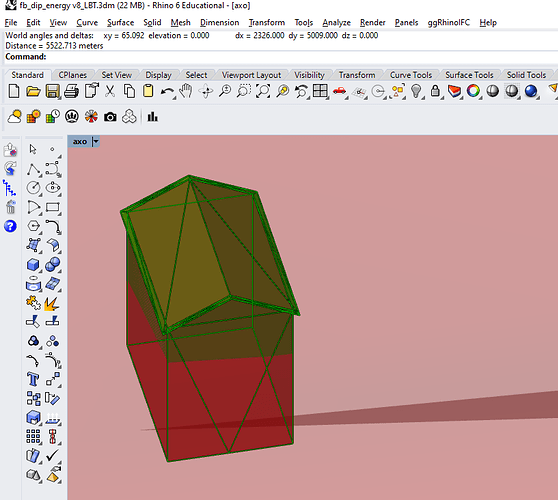 Also, your file is way too big in my opinion, either I would reduce the mesh resolution for the mountain, your context geometry towards North has no effect on direct sun hours. For further studies it could be useful, but this mesh resolution is just killing your machine. It made mine crawl, and that’s a feat. But having 1,6 million polygons is a bit too much, some software just calculate the shadow mask based on a panorama image that you trace with a polyline (Lesosai, Auricon).

This is what I did: opened a new Rhino file in millimeters, baked you houses + mountains as a mesh into the scene, reduced the mesh to 50000 polygons with the ReduceMesh command (you can try QuadRemesh in Rhino 7, I had Rhino 6 open). It messed up the terrain, so I flattened the area nearby and moved the houses to the ground - this is “cheating”, I was trying to get your file to work. I would split the mesh into two pieces, a close proximal mesh (lets say 50m wide rectange), and I would reduce the rest significantly.

Units: I would work in meters. Type “Options” in Rhino, go to “Units”, change from Millimetres to Meters, hit “Ok”. It will ask you if you want to scale the model, say yes (you don’t want a model that is thousands of kilometers wide). Use ZEA to zoom extents, it will relocate your camera. Select everything, “ctrl+click” on your mountain mesh, and ZS (Zoom Selected) to the houses. Use Distance to double check the size, it should be good now.

The houses: I don’t know where you modeled them, but these are not hard to model in Rhino, I would spend the 10 minutes to remodel them into clean breps. Box (3Pt option), SplitFace on the top, move the ridge vertically, select the top border, use Fin to extrude the overhangs. I used MeshToNURB this time, and MergeAllFaces to clean up somewhat.

I rebuilt your Grasshopper definition from scratch, it was very slow. I also put a FalseStart toggle to run the analysis, if you have a heavy file, it resets each time you open it, so you won’t accidentally crash when opening it. Also, it’s a good idea to call the epw file from the URL, that way anyone opening your file can use the same one. I think you used this one, right?

I ran the analysis for July, change the period as you see fit. 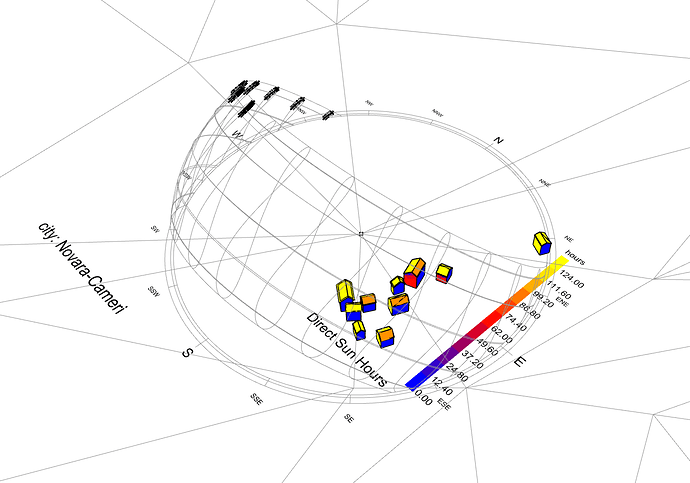 Open a new Rhino file from the template “Large objects - Meters” and open the .gh file, everything should be internalised- you need to zoom out, your geometry is not in the origin (the point in the bottom left is the 0,0,0 point): 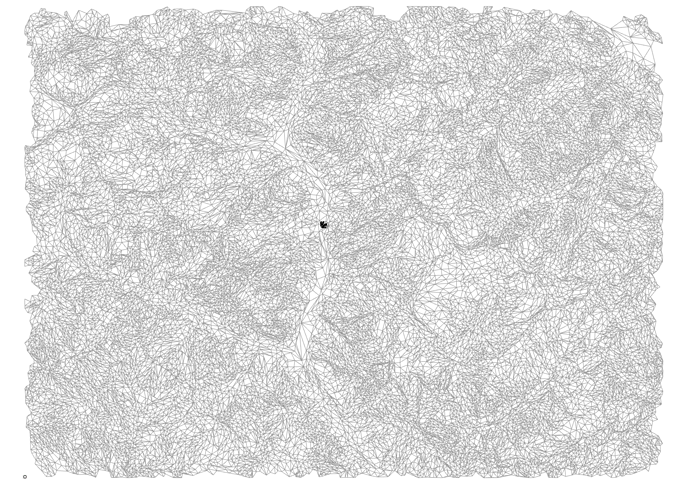 Thank you so much for this!
I usually built everything on rhino myself but these mesh were provided by the Swiss federal topography department.
I opened your file everything works perfectly. I will try to do it myself to understand everything.

Feel free to ask, if you are stuck!

these mesh were provided by the Swiss federal topography department

I’m envious, my country doesn’t have such a service, it sounds super useful.