I’m running annual daylight analysis to get sDA and ASE.

There seems to be a discrepancy in ASE results when I compare them to RadianceIES results for the same building and same inputs. I’m getting 16% ASE using honeybee+ components while with RadianceIES, ASE result is 84.5%.

RadianceIES would give you the results as in the ‘number of grid points that are receiving at least 1000 lux for more than 250 hours’. In my understanding, HB+ does the same thing, I’ve checked the default targets. They both use the same simulation software (radiance) so I’m not too sure why this discrepancy is appearing.

I’m reading the 16% from per area output in HB+ Annual Sunlight Exposure component as highlighted in the last image.

below is the script I’m using

Can it be because one is reporting the % that meets the criteria and another one reports the % that fails?

Thanks for your reply @mostapha

That’s what I thought at first but based on the image below I don’t think that’s the case. The red points indicate >250 hours. so it’s 84% not meeting the criteria. 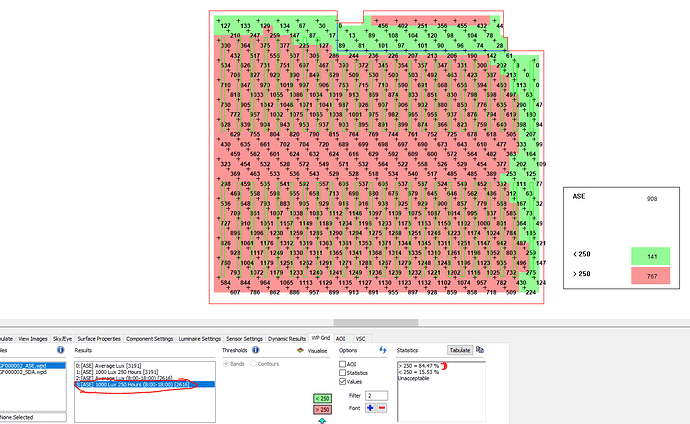 There is a slight difference in the way RadianceIES and HB+ generate grid points (908 points in IES as opposed to 1024 points in GH) but I don’t think that’s the reason. 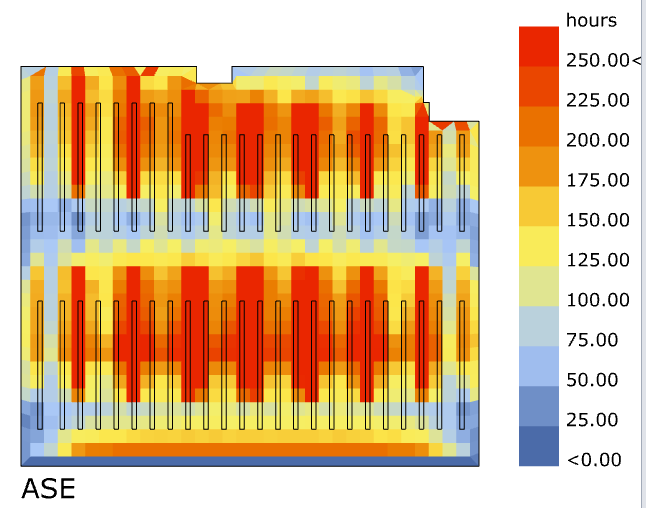 Thanks @devang. It could be causing a difference, but I don’t think it would that big. I used 3 metres for grid size in both models, so the difference is just around a 100 points caused by different divisions in each software. Also since ASE is a percentage of floor area I don’t think grid is the main reason.

Could it be that I need to run 3-phase in HB+ to get accurate ASE results? at the moment i’m running the annual recipe.

How is RadianceIES running it?

it runs as DDS calc in RadianceIES

Does RadianceIES use actual sun positions like HB+ does? I believe it doesn’t.

@devang could you please elaborate more on actual sun positions so I can dig out what RadianceIES is accounting for?

Check this link under “1. Simplified calculation for direct solar contribution”.

In HB+ the direct contribution is accounted for as shown in the image below. First the direct part will be subtracted - this is averaged over three patches of the sky discretization (2nd box). Then, a more accurate calculation of the direct part is added using the actual sun position (3rd box).

UPDATE: I’m not too familiar with RadianceIES or the DDS method but this paper on the method reveals that the direct part of the DDS method is accounted for as: “DDS comprises a default number of 2305 evenly-distributed direct solar positions, as indicated in Equation 3, yet as with indirect contributions, the altitudes of the lowest row of positions are set at 2°. Again, the 4 nearest direct solar positions to the actual sun are also identified at each time step and used to calculate the direct solar contribution through weighed interpolation, based on their respective angular distances from the sun.”

However, if the DDS method is applied exactly like this in RadianceIES and if this can explain the difference (or part of) in the results I do not know.

Thanks @mikkel for the link. Also, @Farah.H, from the images you posted, it looks like grid size is not the same. I might be wrong but when you see the points on the left hand side of the Top-Left skylight, they are 5 in number. Whereas in the HB grid a lot more points are in that location.

RadianceIES would give you the results as in the ‘number of grid points that are receiving at least 1000 lux for more than 250 hours’. In my understanding, HB+ does the same thing, I’ve checked the default targets. They both use the same simulation software (radiance) so I’m not too sure why this discrepancy is appearing.

As per the LM-83-12 standard, the 1000 lux criterion is to be applied for direct sunlight only: 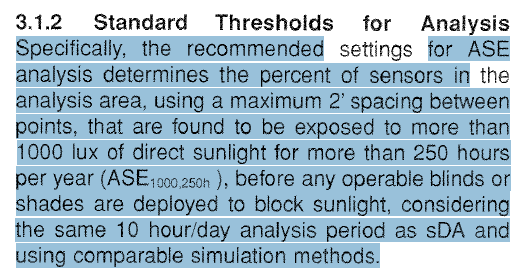 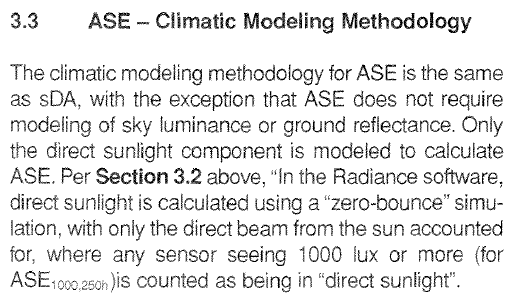 In HB[+] we accomplish this by tracing direct rays only to the solar discs (circled in red below).