Hi there!
I’m trying to run my first simulation with dragonfly-envimet, but in the final step this is what i get.
“envimet4_console.exe” is not recognized as internal or external command, executable program or a batch file

Any idea of the problem?
Thank you! 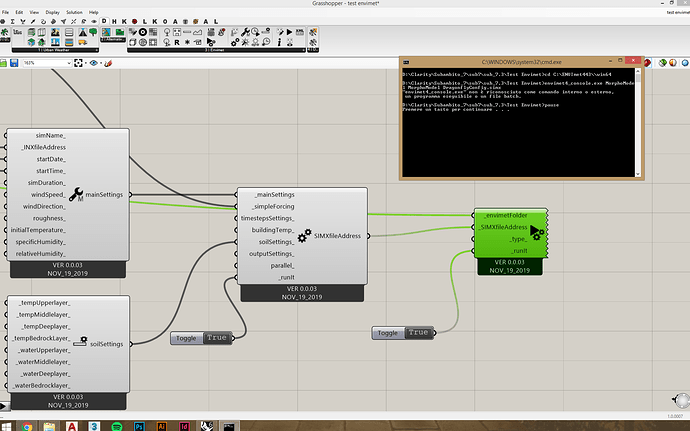 have you download latest version from https://github.com/chriswmackey/Dragonfly? And are you using Envimet 4.4.4.?

Hi @AntonelloDiNunzio , yeah, that was a version problem, i mixed two different releases of the plug in.
Thanks for the help!

Same problem again…i downloaded the latest version of Dragonfly (0.0.03 JAN_23_2020), and i’m using Envimet 4.4.4
Strange fact is that it worked pefectly until one hour ago, than i ran another simulation in another file and the “envimet4_console.exe is not recognized as internal or external command, executable program or a batch file" popped out again.
Even stranger fact is that now also re-running the simulation on the first file i was working on causes the same problem 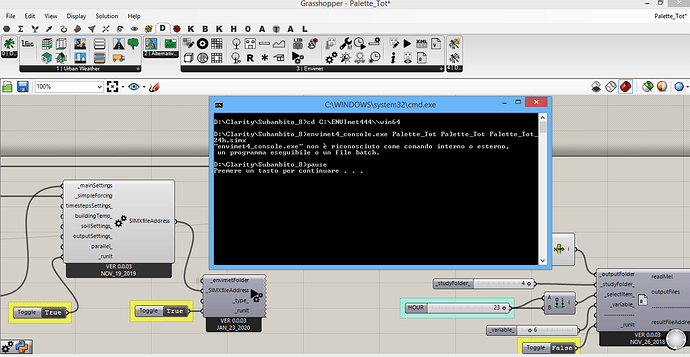 I will improve the batch with some istructions to handle “cd” error with comments and “go to” instructions soon. Basically you had a cd error.
Where is located your Envimet4.4.4 folder? In C unit or D unit? Do you have Envimet in both units?
When you open the second file, have you changed or refreshed the path where Envimet software is?

I would like to replicate the issue, I have an idea but I need to try.

Hi @AntonelloDiNunzio , thanks for the reply
The Envimet 4.4.4 folder is located only in the C unit.
Yes, when i opened the second file i refreshed its location (i was still using the 4.4.3 version of envimet for that file, so i uploaded the directory to use the 4.4.4 version).
I’m using the Button component instead of standard toggle now

Behaviour so far with the first (A) file and the second (B) file:

-Running simulation in B works

-Running simulation in A doens’t work

I’ll attach a link to download the B file, since it seems to be the problematic one