Hello everyone, I have a question for you. A case I am doing now is a granary. When I calculate energy consumption, I need to put wheat in the room. How should this be set up?
My idea was to import wheat into the construction as an opaque material, but it can only be set to a max thickness of 0.6m, and if you spread it all over the room, the Energy Plus won’t work. So I want to ask if you know how to do it?
@mostapha；@chris.

Hi @Ray, check out the internal mass component, I think that might be the best approach.

Thanks for your reply, I tried to use this component. But when the thickness is set to more than 0.6m, which is the same height as the building, the Energy Plus will stop working.

I haven’t used the internal mass component much myself. At a glance I think I would change your set up to this

I would also probably make the wheat cylinder float fully contained in the zone.

But I don’t think that will fully solve your issue.

I would probably do a bit of research into how people typically deal with this kind of high thermal mass simulation using energy plus. I had a quick look to see if there’s anything easily accessible out there for simulating libraries for example (with the thermal mass of books) but couldn’t see anything worth sharing at a glance.

It also depends what information you’re trying to get out of the model.

An alternative approach could be to model the wheat as a separate zone. As a closed box zone with no gains, ventilation, or infiltration, it should give the kind of thermal mass effect you’re trying to achieve, although you’d have to tweak with the constructions of that box to get the kind of performance you’re looking for.

I’d definitely be interested to see where you go with it.

I agree with @charlie.brooker. You don´t need to use the solve adjancies there and the component should be directly plugged into the simulation. I would also simplefy the geometry. You are currently using a cylinder, which is quite intesive in the calculation due to the circualr shape, maybe and octagon is sufficient.

I believe a seperate zone inside would be to finicky to set up.

Thank you for your reply!
I tried what you said and it still doesn’t work.The error shows that：1. Solution exception: ** Fatal ** Program terminated for reasons listed (InitConductionTransferFunctions).
This case mainly studies the cooling energy consumption inside the granary. 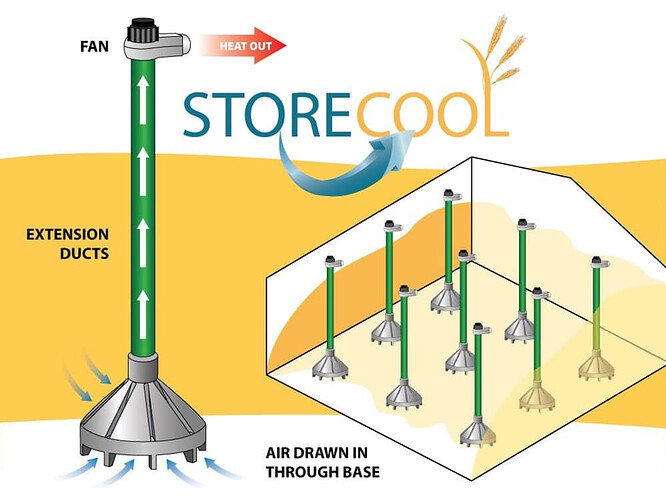 Looking at the first grain storage cooling solution that popped up on google this looks like a fairly complicated scenario to model.

I’d be tempted to speak to a manufacturer/supplier who provides this kind of solution and ask them for guidance.

Yes, this is a bit of a challenging case to model, though it’s not impossible to set up a decently accurate representation of this granary in E+. Still, EnergyPlus is right to throw an error for a good reason:

EnergyPlus tries to determine the starting temperature of everything in the room by “Warming Up”, which essentially means that it runs the first day of the simulation over and over again until the things become stable. However, when you have a very thick material with both a low conductivity and a high heat capacity (like your sample), it could theoretically take weeks to pull heat out of the material from a depth beyond 60 cm. So EnergyPlus fails to converge on a single temperature for the grain and it throws an error.

If you were modeling a material like concrete instead of grain, which has a higher conductivity around 2 or 3 W/m2-K, EnergyPlus would have no problem simulating materials that are thicker than a meter. So one way around this is to increase the conductivity of your grain a little.

I imagine that this representation of your granary with a core temperature that takes months to change is not very realistic, especially if new grain is being added or air can convect between the grains such that the whole material isn’t acting like a big piece of high-density foam insulation.

To account for the convection, you can either raise the conductivity of the material (as suggested above) or you could trying to representing more of the material with “surface area” instead of with material thickness, which will essentially increase the heat exchange between the grain and the air of the room.

Granted, I don’t know what the right balance here is for your particular grain and @charlie.brooker 's suggestion to talk to the manufacturer is a good one.

Thank you for your reply. My research is mainly about the refrigeration energy consumption required to maintain the granary at about 20°C when the granary is full of grains under certain climate conditions, and I do not need to study the scheme of how to cool and store the grains. But thanks for your reply, I’ll look into how to fix it.