Hello everyone,
I’ll try to be as brief as possible here
I ran a three-phase grid based simulation for a 3x3 box model with three different window groups with three different blind states (45deg, 0deg (fully open) and 90deg(fully closed)) [default state - single clear 3mm] and the resulting illuminance values are zero.

I had run this simulation on a single window group with the same window states and it was able to produce values for all hours. But when I added more window groups, the results show no values.

I’m attaching the files for reference.

In HB[+] the window groups must face outwards. This can be checked by the direction of the surface normal. Since HB[+] flips the surfaces, in your model it will emit light out of the room hence why it shows no illuminance. This is a common mistake for the 3ph/5ph-methods, so make sure the surface direction is correct when you add window groups. 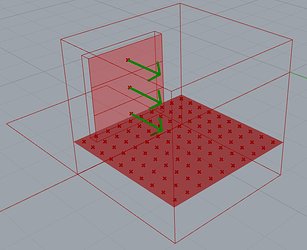 great…it worked!! okay… so that makes sense to flip the surfaces…Thanks for the help… !!!