I was wondering if there is a ‘split floor to thermal zones’ component in the new version (LBT 1.4) as there is in the Legacy version. 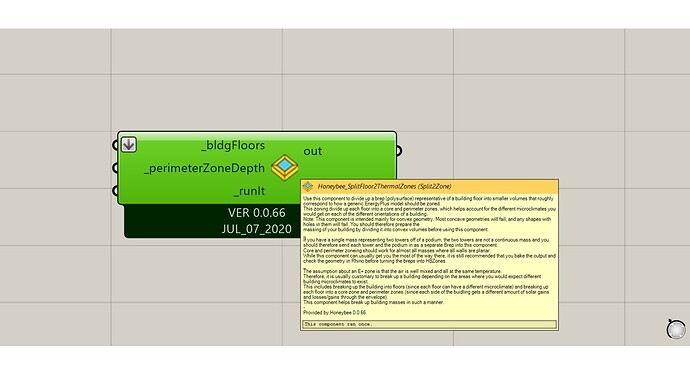 I have one zone, and I want to divide it with air walls through this component.
Regards,
Berrak

Check the BuildingFootprint component in Dragonfly.
-A.

@AbrahamYezioro 's suggestion is a good one. The Dragonfly workflows are designed to do this automatic core/perimeter zoning given building geometry in various different formats. See this tutorial series to understand the dragonfly workflows:

If you’re just trying to set up a honeybee model, you could also use this HB Straight Skeleton component to help process your starting geometry.

use this HB Straight Skeleton component to help process your starting geometry.

This one escape from my sight …
Thanks @chris,
-A.

I have tried using the HB Stright Skeleton component. However, it has not elevated the divided walls, it just divided the geometry on the ground surface. I want to create this kind of division with air walls:

Could you please have a look at my simplified GH file?
Regards,
Berrak
Forum question.gh (28.7 KB)

Hi,
See yellow group in the attached file.
The HB_StrightSkeleton gives you 2D surfaces and not Rooms.

That was so helpful. Thank you so much. 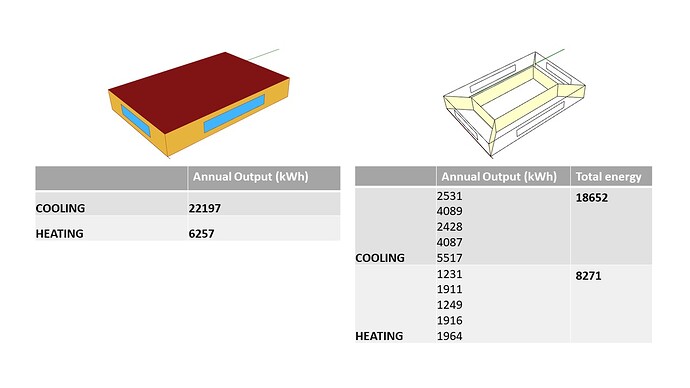 So, I was wondering if I could define the air walls by custom.

You can check the properties of the air walls. By definition air walls don’t have any other property beyond being a layer of air (like to be used on open spaces).
If you want to define your properties you probably want to use internal walls.
-A.

Also I wouldn’t say the results are too different. The combined zone will have perfect air mixing, whereas the split zones will bring in some variability.

I’m still getting to grips with E+, but this might be a situation where adding an air flow network is beneficial and may also impact the results.

I defined internal walls as air walls by assigning the HB-InteriorConstructionSubset of the interior wall as ‘typical air wall’. And HB-InteriorModifierSubset of the interior wall as ‘air_boundary’. In the HB-VisualiseByType component, they are assigned as air walls. But, the heating and cooling loads have still not changed, still not getting close to the one with a single zone (without air wall division).

At the moment, there's an `AirWall` face type in honeybee core but we have not y…et resolved how this gets interpreted in honeybee_energy but I think the route forward is pretty clear now. I think we should add an `AirWallConstruction` to the construction sub-package that maps to the new air wall construction that was recently added to EnergyPlus: https://bigladdersoftware.com/epx/docs/9-2/input-output-reference/group-surface-construction-elements.html#constructionairboundary ... and this equivalent object in the OpenStudio SDK: https://openstudio-sdk-documentation.s3.amazonaws.com/cpp/OpenStudio-2.9.0-doc/model/html/classopenstudio_1_1model_1_1_construction_air_boundary.html I think we will allow people to assign the amount of air mixing per area of Air Wall Face on this Construction object but it will otherwise be pretty static with an optional default amount of mixing that makes sense for typical HVAC air diffusion. We will just fix it to always use `GroupedZones` for the radiant calculation and we'll set the air exchange on the EnergyPlus construction to be 0, writing objects for air mixing into the model separately from the air wall construction assignment. Next, we'll need to add something to the construction setter of FaceEnergyProperties that asserts: ``` if isinstance(self.host.type, AirWall): assert isinstance(construction, AirWallConstruction), \ 'Faces with type "AirWall" only support AirWallConstructions. Got {}'.format(type(construction) ``` Then, I think almost everything should work, including the ConstructionSet, which is already set up to treat air walls differently. However, we may want to add the ability for the user to set the air wall construction on the ConstructionSet if people find themselves wanting to change the air mixing value over large parts of their model. But, for the initial implementation, I think we only support custom mixing of a face-by-face basis. The only hole in this whole workflow is that, if someone hard-assigns an opaque construction to a Face and then changes the face type to AirWall, there isn't a method to get rid of the original hard-assigned opaque construction in the energy extension properties. One way to deal with this is to build something into the honeybee-core face type setter that calls all of the extensions in order to reset the construction but this really feels like overkill. Another way to address this is to add a check into the face construction getter like so: ``` if self._construction: # set by user if isinstance(self.host.type, AirWall) and not isinstance(self._construction (None, AirWallConstruction)): self._construction = None return air_wall return self._construction ``` We'd probably also need to add a check in the `FaceEnergyProperties.to_dict` method but I think that I may go for a solution like this just because it tries to contain the issue to the extension.

I agree with Charlie here that the results are not very different but, if you want to gain a deeper understanding of what is going on in your model, then you should construct a load balance using the HB Annual Loads component. This could tell you whether you have accidentally changed something that you didn’t mean to change when you split up the Room with air boundaries.

That GitHub issue is referring to E+ specific terminology. In the last few years, EnergyPlus added the ability to have radiant heat exchange across air boundaries, which is much closer to how you would expect air boundaries to work. So that is what is meant by “grouping zones”.