Hi community,
I’m modelling nat ventilation in students accomodations with single-side opening. The opening is composed by 2 parts: 1) a fixed perforated metal panel (designed for security/safety pourpose) and 2) a openable side-hung casement window. The perforated panel allows a 46% free area ( 0.5m2) through which air can flow.

Do you find my input reasonable for this kind of design configuration? Please note my window is not sliding (discharge coefficent values suggested by honeybee do not apply to my case) and the holes in the perforated panel are took into account by discounting the operable area. Otherwise I could use the total opening area as input and then decreasing the discarge coefficent, but of which value? Suggestions?

I have some intuition about this, but take it with a grain of salt since I’ve never modeled perforated screens before. At the very least, perhaps my answer will get a discussion started.

Perforations create more laminar air flow, so I think you’ll want a slightly higher air flow then what you would get from a single opening of equivalent area. This is consistent with how EnergyPlus treats different orifices. Open windows assume a more turbulent flow by fixing pressure exponents to 0.5, whereas cracks can have pressure exponents from 0.5 to 1 to capture more laminar flows.

Also note: if you have a single-side opening, you will have bidirectional (two-way) air flow through your window, which is better modeled using the AirflowNetwork (AFN) in Honeybee[+] which will perform a piece-wise (relative to neutral pressure plane) integration of the air flow with regards to vertical direction of the opening[1]: 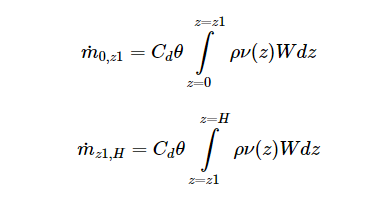 The formula here illustrates that the area reduction factor, and discharge coefficient are both directionally proportional to airflow, so once you figure out how much you want your air flow to change due to your perforated screen, you can just modify either one to achieve the flow rate change you need. I would just increase the discharge coefficient to be more leaky.

That being said, if you do want to stick with the legacy plugin, you can modify your discharge coefficient in the legacy component to capture two-way flow as referenced in this paper.

thanks so much for your reply and forgive the delay in reply; your suggestions led me to a deeper investigation of the conceptual problem.

Perforations are responsible for an acceleration + contraction of streamlines as the air flow is passing through the holes. At the holes, the kind of flow pattern (turbulent, transition, laminar) is function of Reynolds number (*R=uD/*ν) and, consequently, it nature will depend on the hole diameter D (for this reason we can’t say is laminar or turbulent). Certainly, beyond the panel, indoor speeds are lower than initial outdoor speeds and such resultant pressure drop is driven by the whole discharge coefficient. Geometrically, the panel discharge coefficient is affected by two factors: 1) the effective area by through air is flowing (Area holes), 2) the way this air is distributed/flowing through the holes. This second factor explains why adopting a new equivalent area to describe the problem is not enough and why a proper discharge coefficient should reflect that the air flow shape has changed.

Considering this reasoning, cracks/perforations should reflect lower discharge coefficients than conventional windows because of the air resistance descried above and air speeds decreasing. Do you agree? I am not sure if you were saying exactly the opposite when mentioning Energy plus pressure exponents.

However, the estimation of discharge coefficient seems to me very complex and the fact it is kept constant is a limitation. The auto calculation method based on temperatures difference looks to me a better option, especially because the air flow rate is my unknow variable and I want to discover the effectiveness of such perforations in terms of air supply.

On this regard, I wonder if there is a way to apply the ‘auto calculate’ method when the ventilation type applied is 1 (window nat ventilation)?

I never used the AirflowNetwork component but I’m happy to consider that if is more suitable. If I got your point, the setEPNatVent is not able to take into account supply and return leaks from the same window which is providing a double air flow through its opening. Correct?

Geometrically, the panel discharge coefficient is affected by two factors: 1) the effective area by through air is flowing (Area holes), 2) the way this air is distributed/flowing through the holes. This second factor explains why adopting a new equivalent area to describe the problem is not enough and why a proper discharge coefficient should reflect that the air flow shape has changed.

This is a good summary, and since it’s clear that the resulting air flow resistance depends a lot on the type of orifice in the screen, I’m going to backtrack from my previous assertion that the perforations will create faster flow for an equivalent window area, and just say I’m not sure. I’ll explain my reasoning for my uncertainty below.

Considering this reasoning, cracks/perforations should reflect lower discharge coefficients than conventional windows because of the air resistance descried above and air speeds decreasing. Do you agree?

Can you clarify a bit more why you think it’ll be slower? We know that for a given window area, the Cd is lower assuming that the same window area has some obstruction, like an insect screen. But if we reduce the window area to account for that surface obstruction (thereby proportion reducing the volumetric flow by that area reduction) how do we know if the Cd we assign to that reduced area is lower or higher?

If you look at the formula for crack flow (used to model infiltration in EP[1]):

There’s two unknowns, the Cd, and also n (what I referred to as the pressure exponent), which is set as 1/2 for windows or large orifices, but can be as big as 1 for small orifices which exhibit laminar flow[2]. So basically resistance is proportional to velocity for small cracks, and proportional to the square of the velocity for large cracks. Hutcheon and Handergord[2] suggest a Cd of 0.6 for cracks, but the n is dependent on the type of orifice, which at the laminar extreme seems would increase wind flow (for dP >= 1). If you had one small hole in your screen, with laminar flow, and you wanted to model it as a window with equivalent area, you’d actually have to increase the Cd of that window (since there’s no n-parameter to adjust in the window model, you have to account for the velocity increase with the Cd).

It seems like you can get a wide range of behavior by varying screen parameters, and so requires more dedicated research. That’s why I think my earlier suggestion, which was based on reasoning about crack flow dynamics, is too simplistic to deal with the perforated screen scenario. It doesn’t account for interference, and didn’t make enough of a distinction between types of orifices.

If it were me, I would just model multiple parameters, and calculate the mean and a confidence interval from the resulting distribution. It may even be the case that you can be 95% confident of a very narrow range of building performance even with a wide range of discharge coefficients (especially given that the Cd only effects the stack effect, not window driven ventilation). It would be more work, but given how many parameters in EP’s airflow models are fixed by simplifying heuristics, it’ll be more accurate.

I never used the AirflowNetwork component but I’m happy to consider that if is more suitable. If I got your point, the setEPNatVent is not able to take into account supply and return leaks from the same window which is providing a double air flow through its opening. Correct?

Yes, I think AFN is the way to go.

[1] https://bigladdersoftware.com/epx/docs/9-3/input-output-reference/group-airflow-network.html#airflownetworkmultizonesurfacecrack
[2] The chapter on air leakage in Hutcheon and Handergord’s “Building Science for a Cold Climate”.