I am fairly new to Ladybug and this community but I hope you will be able to help me with a problem I am currently working on.
In a large non-conditioned three story tall atrium located in connection with residential buildings, I am trying to simulate the microclimate to get an understanding og the temperatures during especially the hottest periods of the year throughout the atrium. To do this our team has used the component “Honeybee_Set EP Air Flow” and the ventilation type 2 “Custom stack/ wind ventilation” to model natural ventilation with inlet on the ground floor (midplane approx. 1.2 m above the ground) and we have used a similar component with similar inputs for the openable skylights (midplane approx. 8 m above the ground) meant as ventilation outlets.

My question is now is this the correct component to model natural ventilation moving vertically up through three zones? And if so is it correct to input the height of 8 m as the “_inletOutletHeight” or is that meant as the height difference between inlet and outlet in just one zone?

I hope someone can share some insights on this. 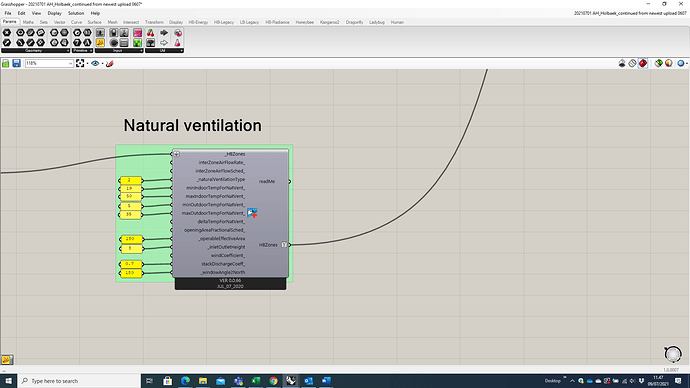 Hi @Lovborg . I’m seeing your post a few months late but am currently trying to do the same as you. Did you end up figuring out how to model ventilation going through 3 zones? Thanks!

We have tried several different methods to simulate natural ventilation in these three large adjacent zones but we are still not sure about our results. Currently our team is also working towards transferring our models into Ladybug Tool 1.3, so that’s taking some of our time currently.
Please let me know if you find a good way to simulated this thanks.

The question of modeling ventilation in an atrium with EP has come up multiple times on the Unmet Hours forum, so you can search through there to get a detailed idea of the various nuances and trade-offs associated with the problem. I would summarize the general response as: there is no good way to do this in EP without the integration of a CFD, but if you don’t have access to a CFD and don’t mind the loss of accuracy your best option is to model the atrium with a single zone with the AirflowNetwork (AFN) object.

The primary limitation with EP in this context is that the zone air is assumed to be a well-mixed volume of air with no temperature stratification, and EP doesn’t model the more complex physics associated with the combined heat and mass flow through zones. The AFN object partially solves the mass flow problem by explicitly modeling the conservation of mass via the pressure difference across the envelope and through zones (which drives airflow dynamics), but this occurs at the resolution of the network of zones and surfaces, where each zone is still assumed to contain a well-mixed volume of air. There is the RoomAir object which does model sub-zone airflow, but requires some prior inputs (about the temperature stratification I believe), which requires information from a CFD. Additionally, the AFN can be implemented in HB-Energy, but not the RoomAir object, so without access to CFD data, or within HB, your best option is to use the AFN to model the atrium zone.

Regarding the subdivision of thermal zone debate, the airflow experts seem to lean towards not subdividing the zone, given (historical) limitations of EP in modeling long-wave and short-wave radiation through zones, and that there is no reason to assume the temperature stratification in stacked EP zones correspond to a large vertical space. I have seen some modelers suggest splitting the zone and using the ZoneMixing and ZoneCrossMixing objects to model stratification/pressure difference, but I assume they mean with prior data/engineering assumptions to set appropriate airflow rates, which again, leads back to the CFD problem.

Personally, I do wonder if the tradeoffs have shifted on the bias towards subdivision though, since the updated Airwall construction models short and long-wave radiation through zones, and airflow. There’s still the limitation of the multi-zone stratification not neccessarily corresponding to an actual single-zone stratification, but given that the AFN can model two zones with a horizontal opening, a minimal two-zone subdivision, with pressure difference modeled through a large horizontal opening might be more accurate then assuming the whole space is well-mixed. That might be a good question to ask on the Unmet Hours forums.