Dear @chris, sorry If I bother you.

I want to understand of is possible to do this type of Analysis with the new LBTools.

For an outdoor court, positioned between more buildings, they want to check if there may possibile focus/spot points caused by the solar specular reflection out from concave Glass Fassade, wich can bring such a High temperature to create possible fire phenomena.
(the customer has already had this type of experience and wants to prevent it from happening again)

I saw your example about the thermal and utci comfort, but I would you ask If Is possible to see only the potential effective surface temperature (p.e. of ground or a affected adjacent Fassade), caused by the specular reflections.
Can you please direct me?

Thanks and best regards

The only simulation engine that will give you surface temperature results is EnergyPlus and, while EnergyPlus Shade Constructions can be changed so that their reflection is specular_, the EnergyPlus ray-tracing engine really isn’t built to model this type of focused solar energy.

If you wanted to do a state-of-the-art type of study for this, you are probably best off doing a Radiance simulation that’s either for a point-in-time or an annual irradiance study over the whole year. Then, you can try to approximate the maximum temperature from the highest irradiance irradiance value and your own simple heat transfer model (in the style of Q = mc∆T, using mass and heat capacity for the material that the sun is being focused on). You should probably model the specular geometries as Mirror Modifiers and make sure that your radiance parameters have a minimum of -dr 1.

Bear in mind that Radiance simulations with Mirror modifiers pointing in all different directions can take a long time to simulate. So it may be wise to do some initial tests with the LB Surface Ray Tracing component like you see in this sample file.

Dear @chris thanks for the response.

Wanting to test an analysis via EnergyPlus, the solution that comes closest to the problem, is to use the HB UTCI ComfortMap?

I have already tried to do a test with a PIT Irradiance Analysis and with the Solar MRT compoment and comparing with the LB Surface Ray tracing. This is the result 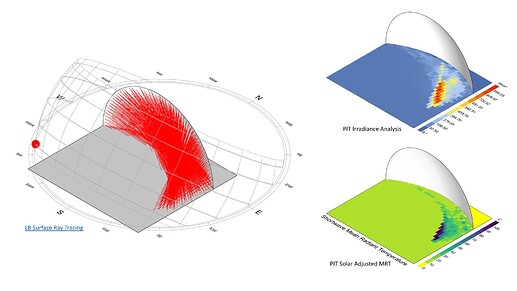 SolarHeat1920×1080 111 KB
A question about the shortwave MRT result. Can It really reach a temp. of 180° on a Winter day, only through a specular solar reflection?

Thanks for the Typ, I will also try this solution.

Then, you can try to approximate the maximum temperature from the highest irradiance irradiance value and your own simple heat transfer model (in the style of Q = mc∆T, using mass and heat capacity for the material that the sun is being focused on)

As always, many thanks for your time and best regards

Wanting to test an analysis via EnergyPlus, the solution that comes closest to the problem, is to use the HB UTCI ComfortMap?

The EnergyPlus part of the comfort mapping recipe isn’t likely to be all that accurate for this case but the Shortwave solar calculation of the map is the bigger term and this is done with Radiance (using very similar methods to the annual-irradiance recipe) so you could get this part to model the focused direct sun well. Th only major difference is that the utci map is going to give you an estimate of MRT over a human geometry, which is very different from surface temperature. Given that a human can easily jus step out of the focal point, I imagine that MRT on a human geometry really isn’t what you’re concerned with and the larger concern is with the temperature that a flammable material could reach when it’s in the focus for a few minutes. For this, I would recommend something more custom like your own simple heat transfer model.

A question about the shortwave MRT result. Can It really reach a temp. of 180° on a Winter day, only through a specular solar reflection?

Well, if concentrated solar power plants can make steam at 400°C and I can ignite a piece of paper using a magnifying glass, then an MRT of 180°C is well within the range of feasibility. But bear in mind that MRT is not the actual temperature of any real material. It’s a theoretical construct that was developed to simplify our thermal comfort models. The real temperature of any material depends on the energy it absorbs, its thermal properties like heat capacity, and the rate at which the energy can be transferred to the rest of the environment by means of convection, radiation and conduction.

Dear @chris,
as you recommended, I want to continue the road using the result out of an irradiance analysis.
Unless I made mistakes in the formula, I converted the energy flux of one day (21 March) into the maximum overall temperature that each sensor from a asphalt material, reaches on that day .
In the formula a take into account the solar absorptance from the surface and the outdoor temperature from the Weather Data.

Errors in advance, at the moment this would be the worst result that can occur, since it does not take into account how much energy lost the surface in the air and any external climatic aspect that absorbs or lost heat.

Now I want to ask, if is possible to do a simulation with this available information, where take in account the climatic situation through the Weather Data information, i.e. that the surface temperature also takes into account the air humidity, the wind speed, the % of temperature remaining from the previous hour, etc. etc.?
forum_Outdoor_HeatSolarGain_v2.gh (55.5 KB)

Thanks for all and best regards

Dear @chris really isn’t there a available procedure that can analyze this type of problem? Talking to some designers, they told me that it’s a crucial point for some types of full glazed buildings with concave fassade, since this fact happened 'Walkie-Talkie' skyscraper melts Jaguar car parts - BBC News.
Would be really interesting to be able to recreate the problem and show through heatmap at what hour, by inserting the temperature at which a certain type of material deteriorates, deforms or becomes flammable.

I did a research in the forum, where the same request was made in more than one post, which sadly is then turned into a mrt analysis.

Your script seems like a pretty reasonable steady state model if you are trying to understand the average temperature of the 0.2m thick asphalt layer over the course of a day. On that time scale, it makes sense to use the total daily radiation and I would expect the thermal diffusivity of asphalt to allow the heat to penetrate 0.2 meters deep into the material over that time. If you wanted to account for the convective and radiative losses to the air and surrounding environment, you could do a few iterations of re-computing the surface temperature using the Delta T and some standard heat transfer coefficients, like the ones you might find in the ASHRAE handbook of fundamentals. You can see that we use some of those methods in this part of honeybee when we estimate the U-Factor of constructions.

But I am sure that your surface is getting much hotter than what your script is showing during the peak condition where the sun is intensely focused on the top most layer of the asphalt and not much time has passed to enable the heat to conduct into the ground or convect/radiate off the surface. So you could probably adjust your script to better understand this condition by looking at the radiation over a very short period of time (eg. the length of time the material is in the focal point) and you can lower the thickness to a depth that you would expect the heat to conduct to in that time given the Thermal Diffusivity of asphalt. At that time scale, you can probably also ignore the convective and radiative component unless it’s more than an hour or so.

Simple steady state models like that can be really useful for adjusting things like the material solar absorptance or heat capacity and understanding how they will influence the temperature. And, assuming that you’ve estimated the input radiation correctly with a detailed Radiance simulation, the results probably won’t be that far from reality.

It’s also possible to build some more sophisticated transient models using similar methods but, at that point, I usually find it easier to “hack” EnergyPlus to get it to do what I want rather than scripting up a whole new model. For a case like this, I might simulate a single “ground zone” with an asphalt top over the course of a day and overwrite the diffuse EPW radiation values to be equal to the radiation results of the Radiance simulation (setting the direct sun to zero) since I know that EnergyPlus can’t model the radiation accurately on its own. EnergyPlus even has some methods for scheduling the solar radiation on design days if you really wanted to get into results at fine timesteps.

But these types of custom-built workflows are how most engineers and product designers build heat transfer models, whether they are testing the heat given off within an electrical appliance or they’re estimating the temperature of a sun shield for a space craft.

thanks a lot for the explanation dear chris.
I will try, with more time available, the paper to perform the analysis through radiance and then subsequently get closer to the solution via thermal formulas. At the moment I’m doing a test with the only irradiance data of one hour and I just added the radiation loss formula according to the Stefan-Boltzman constant. I need to add the convective loss to the air.
PIT_Outdoor_HeatSolarGain_v6.gh (203.3 KB)

You suggested me with

and I have a few questions about it: