I am currently carrying out an environmental analysis in which the wind rose and radiation rose will be used only for certain amount of hours. The annual profile is divided in two seasons, a warm season and a cold season. Because the project is located in the Southern hemisphere the year is divided in two periods, from September to December, and from January to March. I have tried to make it in one single wind rose diagram but apparently is not possible. Does anybody knows how to address this? I guess is a very common issue for people who makes simulations in Ladybug in projects located in the Southern hemisphere.

WindRoseAnnual2408×1151 431 KB
It can be seen how the annual wind rose is well preformed, at the bottom of the image in the description it says 949 hours out of 8760 (year). But when I change the analysis period to only 6 months from September to March as seen in the following screenshot: 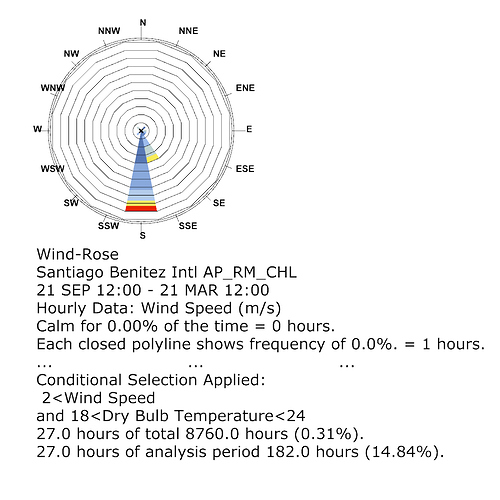 WindRoseWarmSeason1000×1000 210 KB
Does anyone know why this happen? have you ever have the same problem? How did you address it? any idea?

Pay attention that you are defining a conditional statement that may reduce the amount of hours.
-A.

The conditional statement is only meet for 27 hours out of 182 hours (not sure what this 182 hours represent). I believe the right way should be 27 hours out of 4380 hours (the analysis period). Something must me wrong.

Thank you @Tokarzewski it worked, although I don’t understand what is the logic behind.