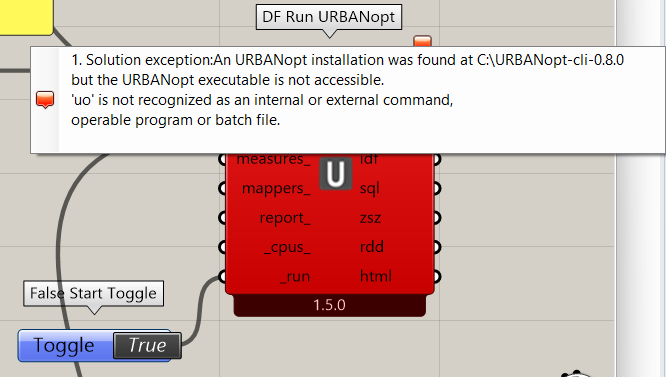 Could someone help, Many thanks in advance!

As the message indicates, this is an issue to work out between you and your IT department. It seems that your User account on Windows doesn’t have access to run the URBANopt CLI executable. Your IT department would need to whitelist the URBANopt installation for you to be able to use it from your account.

Many thanks for your help. I just added an exception for it in the Windows defender.
Is that what you meant? 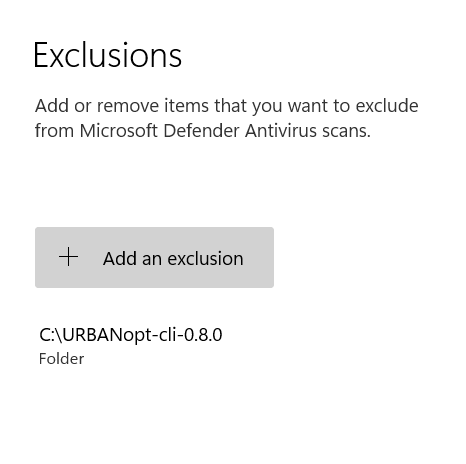 I am still getting the same message. Any further advice I could do as its my personal laptop?

Many thanks again and eager to hear from you

I am still getting the same message. Any further advice I could do as its my personal laptop?

Hmm. In that case, maybe your URBANopt installation was corrupted or it did not install correctly. Does uninstalling and reinstalling URBANopt have any effect?

In fact to make sure from that, now I removed the whole Rhino software including all plugins and reinstalled them, I got the same result unfortunately.

Thanks @Mohammad.ElGhandour ,
I wonder if this has something to do with your username.

Can you open up a command prompt and they in the following:

… but replace [USERNAME] with your actual username. Then hit Enter and post a screenshot of the result. This will help me understand if your environment isn’t being set up correctly.

Kindly find it below 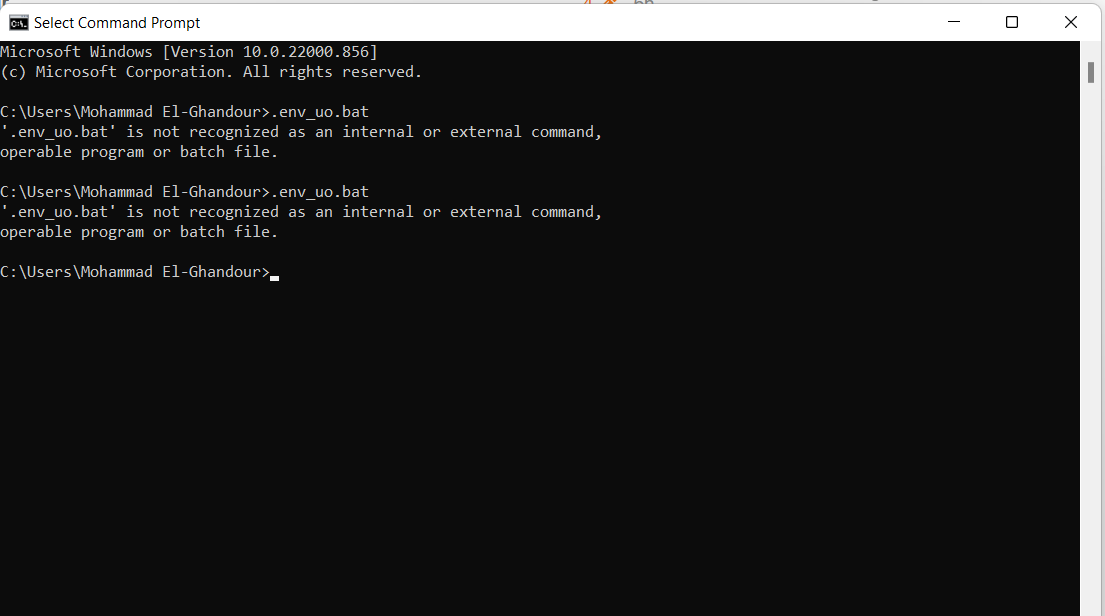 Thanks, @Mohammad.ElGhandour . This greatly narrows down the issue. Can you run the following batch file from command line and post a screenshot of the output:

There’s a chance that the command succeeds, in which case it will give you the .env_uo.bat file that you are currently missing and will get everything working for now. If not, then the message will tell us exactly where things have gone wrong.

I have to imagine that this issue is likely related to the spaces in your username and I’ll try to investigate myself to see if I can recreate it.

Many thanks for your consideration Chris, I do appreciate it a lot! 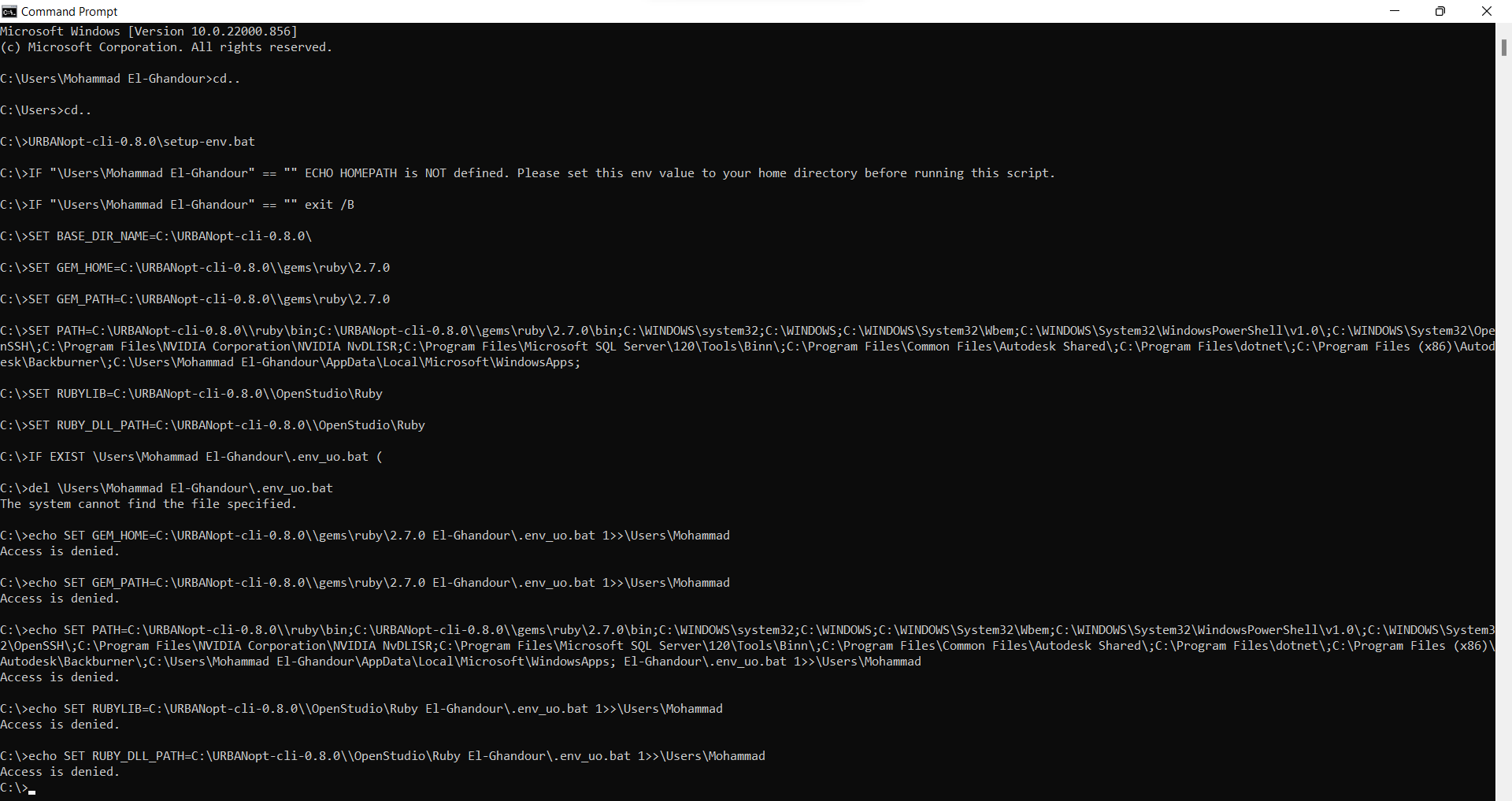 This is very helpful and I can now say that it’s definitely the result of the spaces in your username. It’s also definitely an issue that I plan to report to NREL to see if they can permanently fix it.

I’ll see if I can find a workaround to get you a setup-env.bat file that will work for your username but I don’t know how long this might take.

What I can tell you for sure is that creating another user on your machine that does not have spaces and running Ladybug Tools/URBANopt from there will definitely fix it. I know that creating another user profile is potentially a big effort but this may prove to be the fastest way to fixing it for now until we can get a better solution. I’ll also clarify that this issue is specific to URBANopt simulation and all other Ladybug Tools simulation capabilities should be usable with the spaces in your username.

Ok, I’m hopeful that this was actually a lot easier to address than I was originally thinking. Can you give the following a try:

If this works, then I’ll let NREL know that this is a way to permanently fix the issue and they should integrate it into the URBANopt release.

I exactly did the steps, Unfortunately it gave me the same result.

I hope it helps, This is the new command prompt for setup-env.bat

Ok, we’re making progress! Thanks for bearing with me, @Mohammad.ElGhandour .

From your second screenshot, I see that we’ve definitely fixed one of the issues by means of the updated setup-env.bat file. Can you now send a screenshot of what happens when you run the file that’s at:

Also, if you can upload a copy of this .env_uo.bat file here, I think I can get you a version of it that fully addresses the issue.

In fact its thanks to you for your help and effort, I am really so much grateful!

It’s a little odd that it isn’t working as it seems the .env_uo.bat is working but maybe I am missing something. Let’s see if we can get it to work with the following file:

Just paste that into:

and see if that gets the simulation to suceed.

Thanks a lot, but Unfortunately the same result.

This is the screenshot 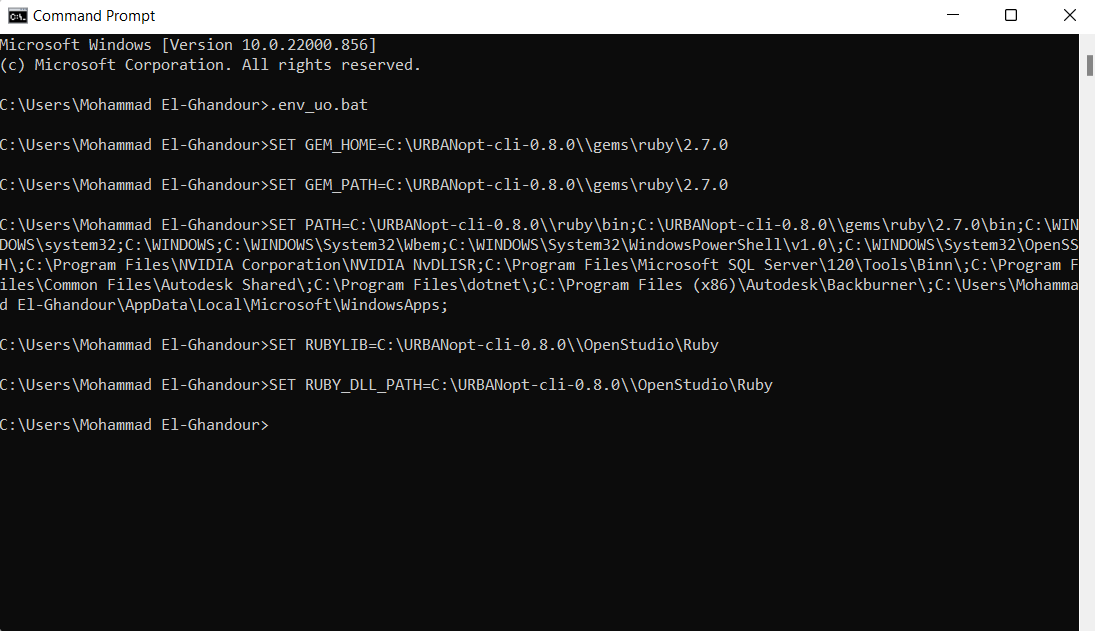 Sorry for the delayed response. After sleeping on it and taking a look at the error message with fresh eyes, I am pretty sure that I know where the problem is now. Give me little time to push a fix and I’ll post back here when it is ready to test.

Ok, I just merged a fix into the latest development version of Ladybug Tools, which should address your issue here:

fix(run): Enable URBANopt commands to run with spaces in paths

You can get the fix on your end but, because the latest development version of Ladybug Tools uses URBANopt 0.8.2, you’ll have to install the latest URBANopt. So, to get everything working on your side, you’ll have to do the following:

After doing all of this, I think you should be able to successfully run URBANopt simulations on your machine. Let me know if you encounter any issues.

FYI, I have already let NREL know about the first issue that we addressed via the setup-env.bat and they will hopefully be able to incorporate this fix into the next release of URBANopt.

Many many thanks for your consideration and effort.

I just have one query, according to the compatibility matrix I should have 0.8.0 with Rhino 7.18 which is the version I have.

I am eager to hearing from you