I have started using GH_CPython component to refer python libraries installed in system.

Recently, I wished to develop few custom components that use Eppy library to avail additional EnergyPlus strings related to EnergyManagementSystem objects for co-simulation in Rhino-Grasshopper.

However, I am unable to extract the EnergyPlus details such as name of the surface, construction name assigned to surface and so on from existing HoneyBee components directly.

I have installed lbt-Grasshopper, ladubug-grasshopper and other libraries but couldn’t use those in GH_CPython as I am unaware of functions aligned to the library.

Can anyone help me to provide a wayforward in the application of these libraries?

I am going to assume that you are NOT referring to the legacy plugins here since the legacy plugins are more like a set of scripts that talk to one another and there isn’t a set of core python packages for them. Here is the current dependency tree of the ladybug tools core Python libraries, which the latest [+] plugins are using: 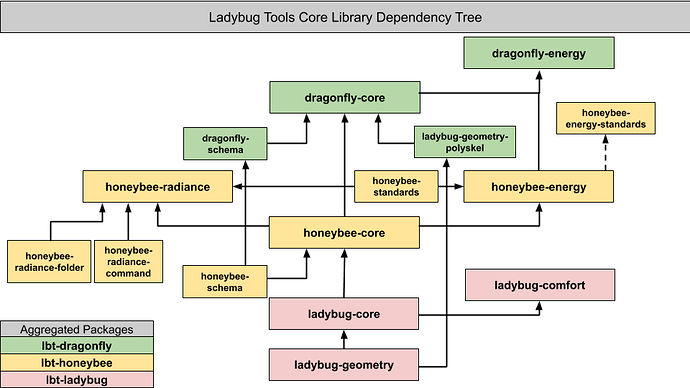 Ladybug Tools Repo Structures (5)960×540 39.4 KB
Note that this tree is constantly changing and may become outdated in the next few months

All of the libraries in this tree are built to run on both CPython >= 3.6 and IronPython 2.7 (the only exceptions are the 2 “schema” libraries, which require CPython but installing them doesn’t break things in ironpython). These core libraries have no dependencies on the Rhino SDK or anything that would tie them to a specific operating system. You can see in the lower-left of the image that the easiest way to get all of these core library packages is with the following command: 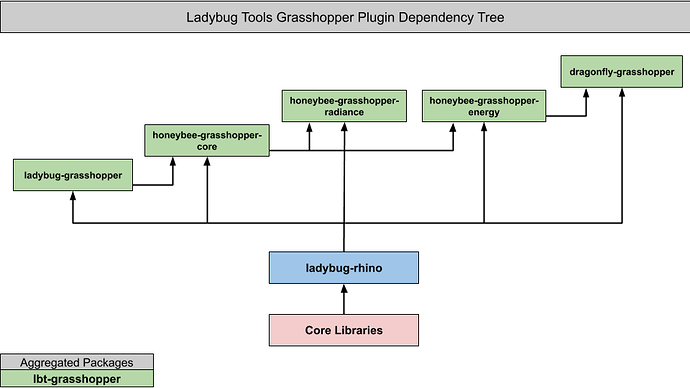 From your question, it sounds like everything you want is in the core libraries so I recommend playing around with those for now.

Thank you soo much @chris. My intention is to develop & inculcate EMS plugins using GhCPython to avoid jumping between EnergyPlus IDF editor and Ladybug tools.