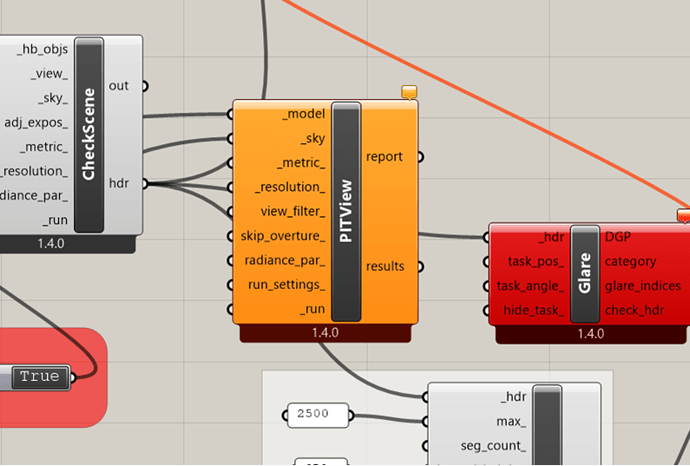 Using the Image viewer and the sample file viewbased.gh I have an odd behaviour.

As can be seen from the above, the checkScene recipe works fine, but when connected, the PITView component triggers an error where the component turns red, reports that it has only completed 9 of 15 tasks and that where it has stopped is the split process step.I presume this must be where the parallel processing part of the recipe is encountering an error in its count of the number of processors available? Could this be a user permissions issue. It does not occur for my computer, but does for almost identical (on a different internal network) computer on the student network.

Are you able to share the logs file in the __logs__ folder in the simulation folder?

… part of the recipe is encountering an error in its count of the number of processors available? Could this be a user permissions issue. …

Hi @mikkel, thanks for the suggestion. I have remotely asked the student to supply the log file. It was an odd behaviour on his machine but not on others’. No-one had set the number of workers manually. We were establishing everything works with the sample files. Will get back with that log file when it arrives.

Meantime, I have also suggested he try the Workers = 1 setting for the HB_Recipe_Settings component to input to run_settings. I should have remembered the separation of workers/cpu count in this way, but wasted time in class puzzling where this input was missing from the PITView component! Thanks for the heads up.

I have looked more carefully at the log file and recognised the issue is a space character in the students’ “My Documents” file location. Fixed by moving his file locations out of that part of his disk…:

Thanks for catching this, @MichaelDonn . This is actually a bug and I’m going to try pushing a fix for it tomorrow. You should be able to run this recipe from folders with spaces in the path and I had just messed up in the way that I had coded this.

FYI, @MichaelDonn , I just merged a fix for this case:

fix(pit-view): Ensure recipe can run with spaces in path

So, if you run the Versioner, you should now be able to run the Point-in-Time-View recipe in folders that have spaces in the path.

New computer. Installed LBT. Run the versioner and sync’ed the viewbased.gh sample file to test the viewbased render process and I get this: 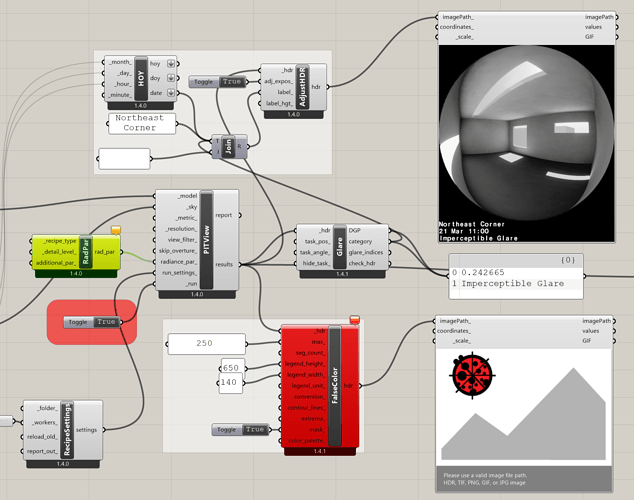 Error message on the red FalseColor component is

I have a student on her home laptop who gets the same visible behaviour but with a different error message (even after running versioner and sync’ing. 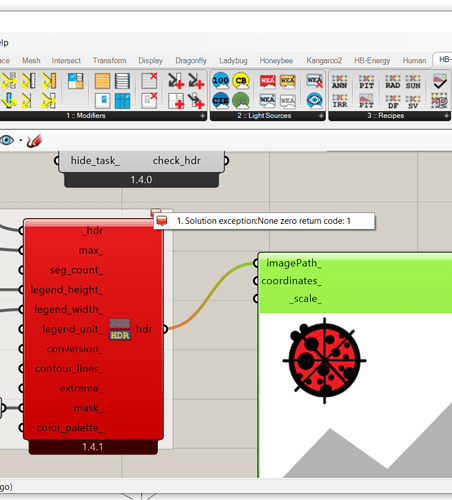 Oddly, if I connect the hdr file after the “AdjustHDR component” to the input of the falsecolor component it produces results. Is there a header reader issue?

Thanks for letting us know about this, @MichaelDonn . It looks like this is actually the same type of issue that @mikkel solved here:

Hi @Asisnath, You are right that the installer uses a newer version (didn’t know that either). However, after conversing with Chris, you should not worry about that, since there are usually not breaking changes between Radiance releases. Any compatibility issues will instead be fixed as they appear. The fix should be available with LB Versioner now.

However, this one affects a different part of the code. So it just results from the latest version of Radiance changing the format of its output on us. In any event, I just pushed a fix, which you can get with the LB Versioner in an hour:

Then, you can see that you get the output you expect: 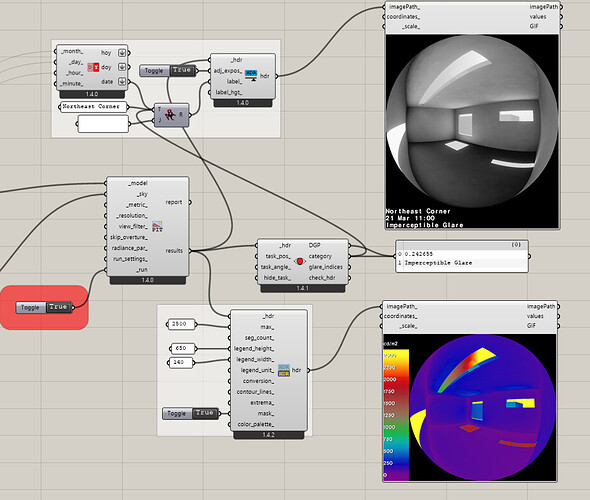 Sorry to bother you but I have a follow on question as I have found your solution worked for me, on my work computer and on my home computer, but not on a student’s laptop. There seems to be some connection to this other Discourse entry: "Solution Exception: Invalid result folder" on AnnualDaylight

There do not appear to be any spaces in Mackenzie’s file name or folder names.

The issue as it appears on the her laptop is this error is reported: 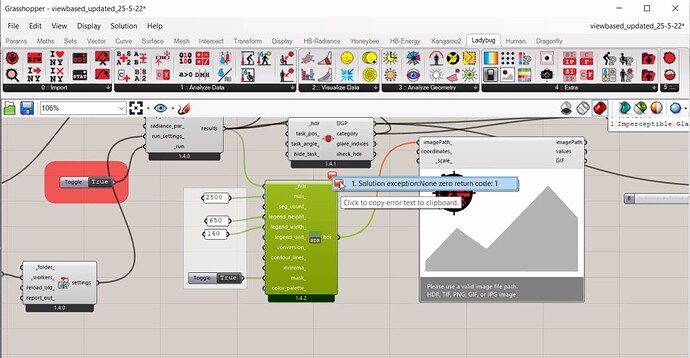 We have run through versioner multiple times. We have uninstalled and reinstalled her version of LBT.

We have used your most recent (6 hours old!) version of the viewbased.gh sample file as a test - downloaded from GitHub as I was getting paranoid about the sync errors we were getting.

As an example of the LB Sync tool operation not quite working, we only sometimes got this error when updating the older viewbased.gh sample as a test.

Sometimes the HB False Color Component was replaced and did not report an error.

At times on running sync, we only had the 1.4.1 False Color component, instead of the 1.4.2 version.

For a time, my home computer looked like this: 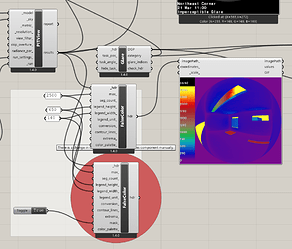 Both versions of the component worked!
If I dragged the component from the HB-Radiance dialog boxes, then we had this which also worked:

On the student’s laptop the following appeared: 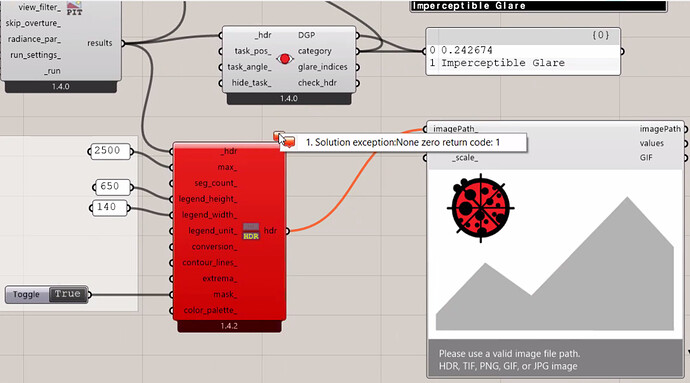 PRIOR TO UPGRADING MY WORK COMPUTER I had the following message: 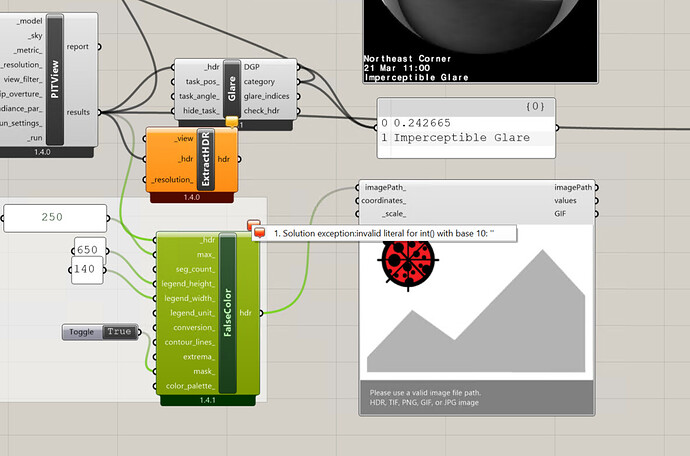 I suspect I had not run versioner enough times. 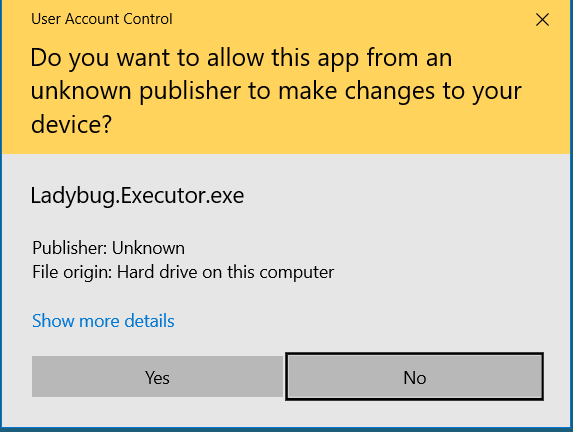 Which produced a surprising batch file dialogue window that I never saw on my home desktop, 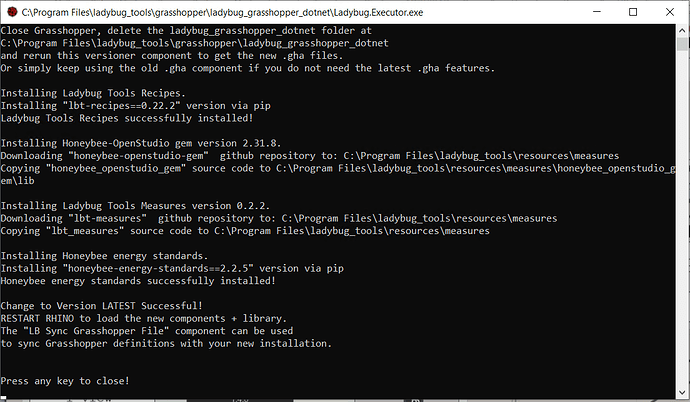 image1104×644 132 KB
Note: in an earlier step on my own computer I closed Rhino, deleted the dotnet folder and LBT versioner would not work at all - in fact LBT would not work. I re-installed LBT from scratch at this point.

Then it clearly worked for me:

There’s a lot of extra info here but only one possible bug. That “Non-zero return code” issue that your student is getting is specifically because they are using a version of Radiance that is somehow incompatible with the latest FalseColor component. What does the HB Check Versions component tell you is the version of Radiance that your student is using? Anything that is this version or newer should work correctly:

FYI, I would recommend that your students install Ladybug Tools by means of the free, single-click Pollination Grasshopper installer. These installers always come with a compatible copy of the simulation engines, which will likely alleviate cases like this.

And, yes, we recently updated the Versioner so that it can change the version of the LBT plugin even when Ladybug Tools is installed in “Program Files”, which requires Admin privileges.

I guess I was going with the installer approach that I understood. Mackenzie was self-taught in using the software in another programme at the School. Last week, she realised I might be a resource that could help with some of her skills development. I pointed out the value of the sample files in showing her how to work (to then she had been using youtube, very successfully I might add). I also wanted to work through with her how she had installed LBT. I will investigate with Mackenzie using the Pollination installer.

I did check the version of Radiance against the Compatibility Matrix, and her version was OK.

Which is what the compatibility matrix states and works for me and not her.

I will also suggest she download again and re-install Radiance…

Thanks for the instant assistance

I did not ask Mackenzie to reinstall Radiance as the HB version tool seemed to be reporting all was OK. I ignored my gut feeling, and unfortunately wasted her and your (@chris ) time. My apologies.

Downloading Radiance and re-installing it solved the problem. She reports (thank goodness for text messaging) that all now works! 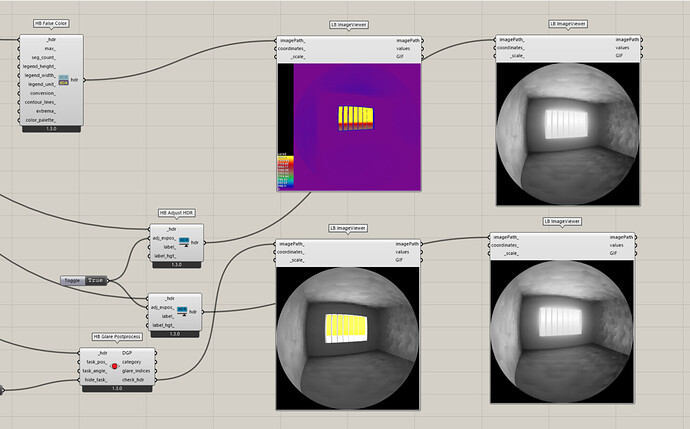 No worries. I’ll admit it’s odd that the version of Radiance was 2021-3-28 or greater but Falsecolor was not working. I guess something else might have been corrupted about her Radiance installation. In any event, I am glad that reinstalling Radiance fixed it.