As a result of the relatively swift adoption of the new LBT plugin that was released a little over a month ago, our usual process of identifying and fixing bugs after a new release was one of the most productive to date. A great amount of thanks is due to the members of this forum who reported issues and provided clear examples that let us reproduce and fix issues speedily. We have packaged the fruits of everyone’s labor into an updated release, version 1.1.0, and we have updated the download on Food4Rhino to install Ladybug Tools for Grasshopper 1.1.0 instead of the earlier versions.

For those who installed the new Ladybug Tools plugin over the last month and want to get the fixes, you can upgrade by running the “LB Versioner” component with 1.1.0 plugged in for the version_ like so:

image1238×451 42.1 KB
The component may give a orange warning that the versioner component has, itself, been updated but this can be ignored since the only thing that has changed about the component is the version number. Alternatively, you could run the second component of the installer.gh currently on Food4Rhino. Also note that, after updating your installation, you can update any Grasshopper definitions that you built by using the “LB Sync Grasshopper File” component.

For this release, we have updated the version numbers of all components to be 1.1.0 such that people can easily identify that they have the updated plugin installed.

Lastly, we have a note to those community members who plan to keep up up with the latest development version of the plugins over the next month. Specifically, we are expecting the development version of the plugin to be a little less backwards compatible after 1.1.0 as we upgrade to the latest versions of the simulation engines and make changes to the underlying object schema of Honeybee. Accordingly, users may prefer to stick with version 1.1.0 of the plugin until the next stable release or be prepared to upgrade their simulation engines as we implement these changes.

Thanks for the update @chris. Is the new OS 3.1 and OS App 1.1 compaitable with this latest update?

@Asisnath ,
No, OpenStudio 3.0.1 is the officially supported version for this release as you can see in the compatibility matrix. We will be working on the upgrade to OpenStudio 3.1.0 in the development version of the plugin now that this release is complete.

Ok @chris. Thanks for the info

4 posts were split to a new topic: Trouble running the set_python_path.bat step of the LBT plugin installation

Are the LB-HB legacy versions (66 & 69) compatible with (OS_3.0.1, Rad_5.3). I’ve been using them with OS_2.5 and Rad_5.2.2. Do I need to keep them and install the new versions for Ladybug_tool_1.1.0 or otherwise should I uninstall the old versions given the new ones would be fulfilling both legacy and LB-tools requirements?

Thanks in advance,
Yasser

Yes, legacy can work with OS 3.0.1 and Radiance 5.3 but you have to follow this workaround to get legacy to work with OpenStudio 3.0.1:

How to get Honeybee Legacy working with OpenStudio 3.0 honeybee-legacy

Hello all, I just wanted to announce that we have gotten the latest version of Honeybee legacy (July 06, 2020) to work with OpenStudio 3.0 but, because NREL released OpenStudio 3.0.0 and 3.0.1 with a small error in their C# bindings, there’s one extra step that you will need to do if you want to use honeybee with OpenStudio 3.0. Otherwise, you will get the infamous PINVOKE error like so: [image] Specifically, you need to go into your lib folder within the OpenStudio 3.0 installation and copy…

Alternatively, you can install whatever engines you want to use with the new plugin in the C:\Users\[USERNAME]\ladybug_tools folder. The new plugin knows to look for engines there but the legacy plugin will not look there.

Thanks so much for your help!
All the best,

how to get complate components? i cannot run renewable analysis and another process.

The linked documentation refers to the Legacy plugins:

Dearest Ladybug Tools Community, We are happy to announce the first stable release of the new Ladybug Tools (LBT) plugin for Grasshopper (version 1.0.0)! You can download it from Food4Rhino and install by following the instructions here. Sample files are included within the zip file that you download from Food4Rhino. We will be posting more content over the next month about how to use the LBT plugin and how to take advantage of its features. If you want to be in the loop about all of these pos…

At the end, it lists the Currently excluded Legacy features:

If you want renewables, install the Legacy version along LBT 1.1.0 from Foo4Rhino.

but i used ladybug 1.1.0 and some of tools are not completed yet

I don’t understand why you cropped your screenshot, all previous versions are available. 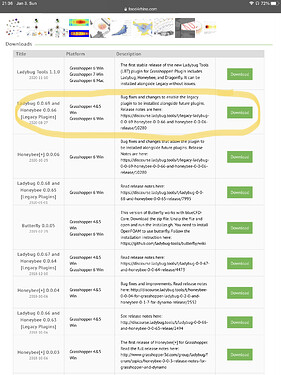 Install the one I highlighted, you will then have the Legacy version which has broader support of features (as of now), and the 1.1.0 version which is much faster, but is not complete yet.

some of tools are not completed yet

Yes, please read the thread I linked above.

because I am a Rhino 7 user

because I am a Rhino 7 user

As far as we know, there are only a handful Rhino 6 plug-ins that don’t work on Rhino 7. You can safely run the legacy version on Rhino 7.
-wim

will the shading mask component be available for rhino 7?