We are happy to announce the latest release of Ladybug + Honeybee [Legacy Version]!

This release marks the final version of the legacy plugins where @Chris and @Mostapha are adding new features. From now on, all new features that we implement will be on the [+] plugins, for which you should expect a lot of development and improvements over this upcoming next year. We will still have stable releases of the legacy plugins in the future but the only changes that we will be making for these releases are updates to work with the latest version of the engines (Radiance, OpenStudio, THERM). Additionally, if anyone in the community adds features into the legacy plugins, we will be happy to review them and add them into the plugin.

In accordance with this frozen development of the legacy plugins, future releases of Ladybug + Honeybee will be coordinated with updates to EnergyPlus/OpenStudio, which occur every 6 months. So you can expect another release 6 months from now that updates Honeybee to be compatible with the latest versions of E+ and OpenStudio (occurring roughly within 1 month after the corresponding OpenStudio release).

As always, you can download the new release from Food4Rhino. Make sure to remove the older version of Ladybug and Honeybee before you do so and update your scripts. On to the updates!

All Critical Rhino 6 Bugs Are Fixed
Many of you know that McNeel has made a commitment to supporting backwards compatibility between in Rhino 6 for third party plugins like ours. However, many of you might have also realized that it has been a rocky past few months as a series of Rhino 6 updates were not always compatible with specific parts of Ladybug. Thankfully, we can now confidently say that all known critical issues between Ladybug+Honeybee and Rhino 6 have been fixed. This involved a few changes on our end, some patches on McNeel’s end, a lot of help from the community members here who helped identify and squash bugs! Thank you to all who have contributed and, because of your valiant efforts, we can now all rest assured that we will not experience Rhino 6 bugs as long as the use the latest release of Rhino 6 and the stable release of LB+HB noted here.

New Line / Area Chart Component
When we started Ladybug years ago, we had told ourselves that we would prioritize the development of visualizations that we knew could only be done with a 3D CAD interface, leaving generic charts and graphs for other tools like Excel. However, user requests for one type of generic visualization kept coming up over and over again: a line chart. Accordingly, this release includes a component to generate line charts. You can see an example that makes use of it here to visualize peak loads and we encourage you to try plugging any annual, monthly or hourly data up to the chart to see the newfound visualization powers that the component holds.

Ladybug Search Component
Many of you know of our online primer resources for searching through Ladybug + Honeybee components. However, there isn’t always a need to go online when you have all of the components on your system. For this reason @devang has added a new component to Ladybug that allows you to search through all of the Ladybug + Honeybee components to see all that have a given keyword in their name. Check out the new LAdybug Search component under the WIP tab:

Updated to Work With New Web Encryption Protocols
This change was actually already in effect for the previous version of the components that were on Food4Rhino because, without it, a lot of LB+HB workflows would be broken. In the notes for this stable release, we just wanted to acknowledge that issues related to downloading EPW files and other automatic downloads performed by the Ladybug components are all fixed.

IronBug Enables More Detailed HVAC Modeling
You may have heard that we follow a philosophy of “easy to start but impossible to master” in our development of Ladybug Tools. We had always imagined that the HVAC systems currently included in Honeybee just represented the “easy to start” part that gets you hooked on the vast world of HVAC systems. Now Mingbo Peng has completed the other half of the equation by releasing Ironbug: a plugin with over 50 components aimed at complete customization of HVAC systems. Ironbug currently works by editing .osm files that are generated by Honeybee legacy and @MingbogPeng has even included a revised OpenStudio component that allows to assign Ironbug HVAC systems. Note that Ironbug is not yet released under the Ladybug Tools Food4Rhino page and you have to follow the installation instructions on @MingoPeng ‘s Ironbug Beta Relase Notes.

Compatibility Issues Fixed with Latest OpenStudio [But We Still Recommend Using OpenStudio 2.5]
Many of you may have noticed that there have been a lot of updates to both EnergyPlus and OpenStudio over the last few months. This stable release of Honeybee includes several updates to be able to support many of these changes. Unfortunately, after all of the upgrades to Honeybee, there are some bugs in the last two versions of OpenStudio (version 2.6 and 2.7) that break specific Honeybee workflows (even though 95% of use cases are probably still ok). For this reason, we still recommend that users install an older version of OpenStudio - specifically OpenStudio 2.5 - in order to ensure full compatibility with Honeybee.
We have been coordinating with the OpenStudio development team in the last month such that we are fairly confident that the next version of OpenStudio and OpenStudio 2.8 will not have any bugs. For now, just stay tuned and use OpenStudio 2.5 if you want to be sure that you have full Honeybee capabilities.

Better Support for GBXML Workflows
With this release, we have officially transitioned to using OpenStudio’s translators in order to export / import gbXML to / from Honeybee, which are far more reliable than our previous methods. As such, we have gotten rid of the old “Grizzly Bear” component and we now recommend that everyone use the OpenStudio to gbXML component to export gbXML and use the gbXML to Honeybee component to import gbXML. To further support gbXML workflows, we have added a few features to import more information from the gbXML files to Honeybee. At this point, the “gbXML to Honeybee” component will import all geometry, constructions, and boundary conditions (including adjacencies). Loads, schedules and HVAC systems must still be reassigned in Honeybee but these additional import capabilities along with the latest gbXML viewing/editing capabilities in Spider should enable tighter workflows between gbXML and Honeybee. To get a sense of the potential of the new workflows, check out this example on hydra that imports a full-building gbXML to build a combination daylight and energy model. 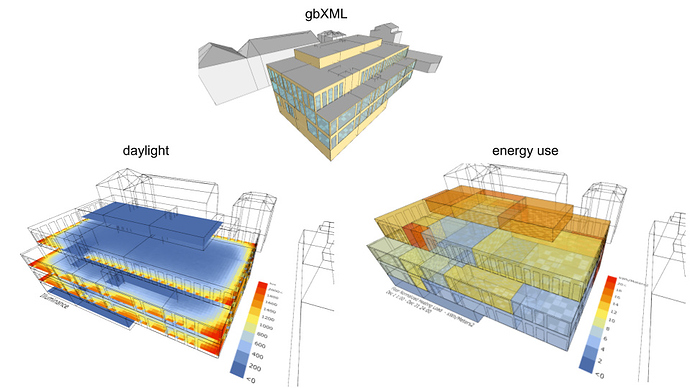 gbxml_workflows.jpg960×540 137 KB
Special thanks is due to @TheoA and @MichalDengusiak for building such a clean gbXML for the example using a Revit export that was fixed using Aragog!

Ground-Sourced Hydronic Systems
You may have noticed that the previous stable release of LB+HB introduced options for modeling ground sourced VRF and WSHP systems and this release expands upon these capabilities to include options for ground sourcing any of the template systems that have both boilers and chillers. This includes VAV systems as well as all hydronic systems, the most noteworthy of which is arguably the low temperature radiant systems, which may stand to gain the most from ground sourced heating and cooling. Simply plugging in a -1 to the heatRejectionType_ input of the “Cooling Details” component will assign a ground sourced version of the HVAC:

GroundSourcedHydronic.png2728×971 129 KB
These new ground sourcing capabilities are only available if you are using OpenStudio 2.5 or above (though, as we mentioned previously, versions after 2.5 are not currently recommended). Also, due to an issue in EnergyPlus’s autosize calculation, you will have to hard size the ground sourced chiller using the new coolingHardSize_ input on the Honeybee Cooling Details component.

Honeybee Generators Moved Out of WIP
Many veterans of this forum remember that the “Run Energy Simulation” component originally supported the addition of Photovoltaics into the simulation and these PV components were moved to WIP when we transitioned to the OpenStudio component. Thanks to @chris ‘s development and testing by @Grasshope and @AbrahamYezioro , we can say at last that the PV components work completely with both the OpenStudio and the “Run Energy Simulation” components. See an example here of Photovoltaics in a Honeybee OpenStudio simulation.

Updated to Work with THERM 7.6
Since the last stable release, there has been a new version of THERM released. This stable release of the Honeybee THERM components is now compatible with version 7.6 (but not any versions of THERM after this). Importantly, LBNL has released THERM 7.7 in the last couple of weeks but we do not recommend using this version of THERM until we can do more thorough testing. For nowTHERM 7.6 and THERM 7.5 are fully supported by Honeybee.

More Information from THERM U-Factor Tags
In addition to the upgrade to 7.6, we have added a few more outputs to the THERM result rader that support the calculation of PSI values from THERM results… Credit goes to Ed May for develping these workflowsand you can see his full post on how to calculate PSI values in Honeybee here.

And, with that, we conclude our addition of new features to Ladybug + Honeybee [Legacy Version]. Thanks to all who have helped make this plugin the wonderful project that it is and we hope that you stay tuned for the dawn of a new era of Ladybug Tools as we turn our efforts fully to the [+] plugins.

P.S. We are currently attempting to get a Wikipedia page for Ladybug Tools and, if anyone reading this has any experience publishing to Wikipedia, please let up know if you would be willing to help by either responding to this post or emailing us at info@ladybug.tools.

Great news @chris and @mostapha,
As always, we can expect to have a birthday twice a year (at least) and many other happy days in between.
Thanks,
-A.

Big congratulations, and many thanks to the great work of @mostapha, @chris and the LB+HB+BF+… development team.

Nice works as always guys, this all looks very useful. Thank god I finally have access to a line graph tool in GH.

I’m glad to see the [+] plugins are going to start taking on more of the legacy component workflow soon, I’ve been waiting a long time to have access to HB simulation tools available in pure python form!

Congratulations! Will the [+] plugins/full plugins be available in the Dynamo package manager as well?
Thanks for a great tool,
Mads